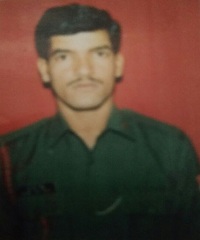 Lance Naik Dharamveer Singh was born on 17 Jul 1976 and hailed from Dhamalaki Dhani village in Khetri tehsil of Jhunjhunu district in Rajasthan. Son of Shri Jaimal Singh and Krishna Devi, L/Nk Dharamveer Singh joined the Army on 14 Dec 1995 at the age of 19 years. He was recruited into 155 Medium Regiment of the Regiment of Artillery, the important combat support arm of Indian army.

After serving for a few years, L/Nk Dharamveer Singh got married to Ms. Birjesh Devi and the couple had a daughter Monika. After serving for a couple of years with his parent unit, he was deputed to serve with 43 RR battalion deployed in J&K for counter-insurgency operations.

During June 2002, L/Nk Dharamveer Singh’s unit was deployed in a terrorist infected area of  J&K.  Consequently, the unit troops had to undertake operations against the terrorists on a regular basis. Based on the intelligence reports about the presence of few hardcore terrorists in the AOR (Area Of responsibility) of 43 RR Battalion, a decision was taken by the battalion to launch an operation on 28th Jun 2002.  L/Nk Dharamveer Singh was selected to be part of the team that was tasked to undertake the operation.

As planned, L/Nk Dharamveer Singh along with his comrades reached the suspected area in Chhund sector and launched a search and cordon operation. The team soon made contact with the terrorists and a fierce gun battle followed thereafter. During the exchange of fire, L/Nk Dharamveer Singh got injured seriously. He later succumbed to his injuries and was martyred. L/Nk Dharamveer Singh was a brave and determined soldier, who laid down his life at the age of 24 years in the line of his duty.