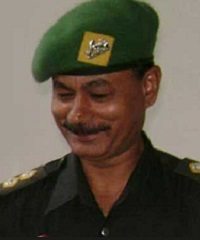 Subedar Major Fateh Singh was a soldier in the Indian Army belonging to the Defence Security Corps and was a leading champion shooter. Sub Maj Fateh Singh was an accomplished Big Bore shooter and had made Indian proud at the 1st Commonwealth Shooting Championships held in New Delhi in 1995. He had won a gold and silver medal in the Big Bore Rifle event at the Commonwealth Shooting Championships in 1995. He was a mentor and senior member of the Indian shooting team.

He retired from the army as a Subedar Major from the 15th Dogra Regiment in 2009 and joined the DSC, a force responsible for the security of various Defence Establishments. Initially, he was posted at the Army College in Mhow, where he was a part of the Army’s Marksmanship Unit for many years. Later in 2013, he got transferred to the unit located at the Air Force Base Pathankot.

On the night 02 Jan 2016 at 0330 hr, five to six heavily armed terrorists entered the lines and opened indiscriminate fire on the troops. On hearing the sound of gun shots Sub Maj Fateh Singh went outside the house to check out and got trapped in the firing by the terrorists. He got wounded seriously and later succumbed to his injuries. Sub Maj Fateh Singh was a brave and committed soldier who laid down his life in the service of the nation.