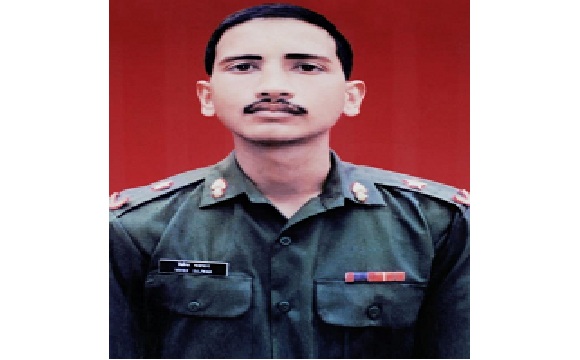 2nd Lt Vivek Sajwan hailed from Yamkeshwar tehsil of Pauri Garhwal district in Uttarakhand and was born on 27 Dec 1972. 2nd Lt Vivek Sajwan completed his schooling from Kendriya Vidyalaya in INA colony Delhi and and went on to do his graduation at Dayal Singh College New Delhi.  Subsequently he got selected to join the Army after clearing the Combined Defence Services Examination. After rigorous training at the Officers' Training Academy(OTA)Chennai, he got commissioned as a Lieutenant in 1996 at the age of 23 years.  He was recruited into the Army Service Corps, the logistic supply arm of Indian Army.

As his first assignment, 2nd Lt Vivek Sajwan was posted to serve with the 15th battalion of the Grenadiers Regiment, an infantry regiment with a long history of gallantry and battle honours. The unit was deployed in a militancy affected area of J&K and was engaged in counter insurgency operations on a regular basis. He soon honed his field craft skills and became Ghatak Platoon commander of the unit.

During 1998, 2nd Lt Vivek Sajwan’s unit was deployed in the J & K along the LOC as part of "Operation Rakshak".  The LOC was highly active and volatile where ceasefire violations occurred very often and without any warning. The unit's AOR(Area of Responsibility) was also being used by the terrorists for infiltration with the connivance of Pakistani security forces. The infiltration by the terrorists was invariably attempted under the cover of artillery fire or with the help of the Border Action Team(BAT). On 5th Jan 1998, the unit received information from intelligence sources, about the presence of two hardcore terrorists in a village falling under the unit's AOR.  The commando platoon 'Ghatak" under the leadership of 2nd Lt Vivek Sajwan was tasked to neutralize the terrorists.

On 06 Jan 1998, 2nd Lt Vivek and his soldiers reached the suspected area and laid a cordon around it. 2nd Lt Vivek leading the operation, tactically moved his troops to close all escape routes for the militants. The militants in sheer desperation resorted to indiscriminate and heavy firing against the troops at around 1230 hrs. Undeterred, 2nd Lt Vivek directed his troops to keep engaging the terrorists and pin them down. At around 0300 hrs the number 1 scout of the platoon got hit by a bullet and was seriously injured. In an effort to corner the terrorists 2nd Lt Vivek took the scout number 2 and lunged forward. Panicked by the bold move of 2nd Lt Vivek, the terrorists resorted to heavy firing and injured the scout no 2 too. Looking at the gravity of the situation, 2nd Lt Vivek moved ahead swiftly to rescue the injured soldier and eliminated one terrorist by firing from close quarters.

However, in the ensuing gun battle 2nd Lt Vivek received multiple gun shots and got seriously injured. He soon succumbed to his injuries and was martyred. 2nd Lt Vivek was a gallant soldier and a gritty officer, who laid down his life in the service of the nation following the highest traditions of the Indian Army. 2nd Lt Vivek Sajwan was given the gallantry award, “Shaurya Chakra” for his raw courage, leadership, fighting spirit and supreme sacrifice.