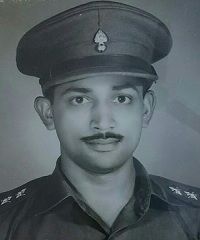 2nd Lt Sumer Singh Yadav hailed from Ajmer in Rajasthan and was born on 21 Sept 1941. Son of Shri Shivtaj Singh Yadav, a police officer and Smt Suraj Kaur, 2nd Lt Sumer Singh was third among eight siblings. He did his schooling at Govt. Higher Secondary School, Top Dara in Ajmer and subsequently graduated from RR College in Alwar. He was a keen sportsman and excelled in cricket and athletics.

2nd Lt Sumer Singh was inclined to join the Armed Forces right from his younger days which further got strengthened after the Indo-China War of 1962. Eventually, he got selected to join the Army and graduated from OTA Chennai. He got commissioned into 3 Grenadiers of the Grenadiers Regiment, an infantry regiment with a rich history of gallantry and battle honours. The Grenadiers have the unique and distinct honour of getting the most number of Param Vir Chakras, India’s highest medal for gallantry, among all the Indian Army’s Infantry Regiments.

2nd Lt Sumer Singh was posted to NEFA (now Arunachal Pradesh) as his first assignment after commissioning. Later his unit moved to the peace area in Delhi. 2nd Lt Sumer Singh being tall and handsome, was offered the post of ADC to the President of India but he declined the offer as he loved to be with his unit in active operations. In May 1964, 2nd Lt Sumer Singh married Ms. Asha Yadav, daughter of Col. RL Yadav.

During Sep 1965 2nd Lt Sumer Singh’s unit moved from NEFA to Delhi area to take over the duties at Rashtrapati Bhavan. Though the Indo-Pak War of 1965, officially ended on 23 Sep 1965 the enemy forces infiltrated and occupied many posts in the Rajasthan sector. The 3 Grenadiers battalion deployed in Jaisalmer and Barmer sub-sectors was given the responsibility to evict the enemy forces. The companies of the battalion were deployed over 140 kms from Sadhewala (Jaisalmer sub sector) in the west to Sanchu (Bikner sub sector) in the east.

2nd Lt Sumer Singh was part of the company deployed in Sadhewala. The two companies (B & D) of 3 Grenadiers and two coys of RAC under Force Cdr Maj PS Grewal were deployed near Sadhewala at Ghantiali Ka Mandir. The enemy strength at Sadhewala was ascertained to be approx 250 to 300 incl Regulars, Sutlej Rangers and Mujahids. A recce platoon led by Lt DS Baidwan silenced an enemy listening post killing four and capturing one POW who gave valuable information about the enemy deployment.

The attack was planned in two phases and the first phase commenced on 16 Nov 65. The phase 1 of the attack was launched by B Coy and one RAC Coy. The leading coys were pinned down due to heavy enemy fire. However undeterred 2nd Lt SS Yadav and his comrades moved up and took charge of the battle. The objective of phase 1, a 1.5-mile long sand dune, was finally captured after fierce fighting by 1030 hrs on 16 Nov. Again at dawn of 17 Nov 65, the second company and a company of RAC launched the phase 2 of the attack. The raw courage and extraordinary gallantry of the soldiers of 3 Grenadiers were enough to unnerve the enemy and finally, Sandhewala was captured by 0800 hrs on 17 Nov 65.

However 2nd Lt SS Yadav got seriously injured during the battle and later succumbed to his injuries. 2nd Lt SS Yadav was a gallant soldier and a gritty officer who laid down his life at the age of 24 years in the service of the nation.