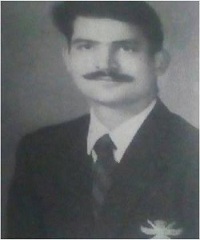 2nd Lt Satish Kumar Jaswal hailed from  Una district in Himachal Pradesh and was born on 15th Oct 1948. Son of Shri R L Jaswal and Smt Lilavati Jaswal, 2nd Lt Satish Kumar was commissioned at the age of 21 years on 21 Dec 1969. He completed his initial school education from Delhi Public School and then got selected to join the prestigious NDA Khadakvasla. He was commissioned into 1 Dogra of the Dogra Regiment, a regiment known for its valiant soldiers and numerous battle honours.

During Indo- Pak 1971 war 2nd Lt Satish Kumar’s unit 1 Dogra was deployed on the western front. In December 1971 India had to go to war with Pakistan as the genocide perpetrated by the Pakistani army in their erstwhile eastern part of the country had resulted in an unprecedented influx of millions of refugees into India. Though the war was concentrated on the eastern front, Pakistan launched operations in western front too. By 15 Dec 1971, India had almost achieved victory on the eastern front but the border skirmishes were still going on, on the western front. 1 Dogra was involved in operations in the Shakargarh Sector during that period.

On 15 Dec 1971, 2nd Lt Satish Kumar was leading a patrol party deep into enemy territory in the area of Bisso Buzurg and Dhingar in the Shakargarh Sector. The aim of the patrol party was to recce the area and assess the enemy threat for launching subsequent operations. As 2nd Lt Satish Kumar and his soldiers approached Dhingar village, an enemy ambush party was waiting for them. The enemy soldiers probably were watching the movement of the patrol party and had planned to ambush them. The enemy troops opened fire as the patrol party came within the firing range and attacked them at close range with automatic weapons and grenades.

2nd Lt Satish Kumar though taken aback by sudden attack quickly reorganized his troops and swung into action. He ordered his men to repulse the attack forcefully. Consequently, a fierce gun battle followed thereafter. However, during the exchange of fire 2nd Lt Satish Kumar was hit by a bullet. Undeterred and without caring for his safety 2nd Lt Satish Kumar continued to give directions to his patrol and succeeded in defeating the ambush party. 2nd Lt Satish Kumar later succumbed to his injuries and was martyred. 2nd Lt Satish Kumar displayed gallantry and leadership of a very high order during the operation and laid down his life at the age of 23 years in the service of the nation.

Second Lieutenant Jaswal was given the gallantry award, “Vir Chakra” for his cold courage, fighting spirit, devotion to duty and supreme sacrifice.

The Citation for the Vir Chakra Awarded to him reads:-

Second Lieutenant Satish Kumar Jaswal led a patrol deep into enemy territory in the area of Bisso Buzurg and Dhingar in the Shakargarh Sector. On 15 December 1971, when the patrol approached Dhingar village, an enemy ambush party opened fire at close range with automatic weapons and grenades. Second Lieutenant Jaswal ordered his patrol to charge the enemy ambush. In the process, he was hit by a bullet. Despite his injury, he continued to give directions to his patrol and succeeded in defeating the ambush party before succumbing to his injuries.

In this action, Second Lieutenant Jaswal displayed gallantry, determination, and leadership of a high order.