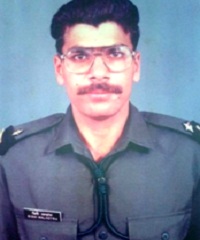 2nd Lt Rishi Ashok Malhotra hailed from Bharatpur district in Rajasthan and was born on 13th December 1971. He did his schooling from Loyola High School, Pune. During his student days, 2nd/Lt Rishi was good in academics and even got selected under the Rotary Youth Exchange Program in class 12. As a result, he spent one year at Upper Dublin High School, Philadelphia. Subsequently, he returned to Pune to complete his BSc (Chemistry) degree and eventually graduated from Fergusson College, Pune in the year 1992.

Later that year he got selected to join the Army through the Combined Defence Services Examination and joined the Training Academy in July 1992 at the age of 21 years. He passed out of the Academy on 11 Dec 1993 and was  commissioned into the 8th Battalion of the Maratha Light Infantry Regiment, an infantry Regiment known for its intrepid soldiers and numerous battle exploits. After commissioning he got posted to the Kashmir valley as his first assignment.

During May 1994, 2nd Lt Rishi Ashok Malhotra’s unit was deployed in the Kashmir valley. As the AOR(Area of Responsibility) of the unit was afflicted with militant activities, the unit troops had to undertake counter-insurgency operations on a regular basis. Within a short period of time, 2nd Lt Rishi gained operational experience and honed his field-craft skills. Based on the information from the intelligence sources about the presence of some militants in the AOR of the unit, a search and destroy(SAD) operation was launched in the area of Lai Dramman in Doda district on 18 May 1994 under the leadership of 2nd Lt Rishi.

2nd Lt Rishi selected an extremely difficult route in high altitude jungle terrain to reach the suspected area in order to achieve an element  of surprise. After traversing a distance of about 30 kms over two consecutive nights, 2nd Lt Rishi along with his comrades reached the suspected area and launched the search and cordon operation in the early morning hours of 20 may 1994. The move of his column with utmost stealth and guile took the militants by complete surprise. He then moved towards the hideout and engaged the militants with very heavy volume of fire. An intense gun-battle ensued thereafter with heavy exchange of fire.

Leading from the front and showing extraordinary courage, 2nd Lt Rishi kept advancing to the hideout. However while covering the last few yards to the hideout, 2nd Lt Rishi received gun shots in his chest. Despite being severely injured, 2nd Lt Rishi kept moving and reached the hideout. In a rare show of gallantry, he then attacked and eliminated two militants before collapsing. He later succumbed to his injuries and was martyred. 2nd Lt Rishi was a valiant soldier and a gritty officer who laid down his life following the highest traditions of the Indian Army. 2nd Lt Rishi Ashok Malhotra was given the nation’s second highest peace time gallantry award, “Kirti Chakra” for his cold courage, unyielding fighting spirit and supreme sacrifice.

The citation for the “Kirti Chakra” awarded to him reads: