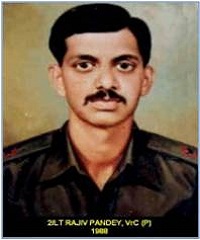 2nd Lt Rajiv Pandey was born on April 11th 1962 and hailed from Jabalpur in Madhya Pradesh. Born in a military family to Lt Col RP Pandey (Retd) and Mrs Sankuntala Pandey, 2nd Lt Rajiv Pandey was determined to join the Armed Forces since his childhood, following into the footsteps of his father. He completed his primary education in Central School, Kirkee and continued with his higher education in Government Science College, Raipur. After graduating, he passed the Combined Defence Services Examination and got selected to join the Army.

He got commissioned on June 08th, 1985 as a 2nd Lt at the age of 23 years. 2nd Lt Rajiv Pandey was commissioned into 8 JAK LI of the J & K Light Infantry Regiment, a Regiment with a long history of gallantry in numerous battle exploits. During early part of 1987, 2nd Lt Rajiv Pandey got posted to Siachen area, one of the toughest battle fields in the world.

After the end of the first Indo-Pak War of 1947-48, a Cease Fire Line (CFL) was established from Manawar in Jammu to Khor (NJ9842) in Ladakh, just short of the Karakoram glaciers. No precise line was extended beyond this and under the Shimla Agreement of 1972, the CFL was redefined and named as the Line of Control (LoC). After provocative actions by Pakistan in the Siachen area, India captured the area in 1984 during Operation Meghdoot. Later, Pakistan launched an assault in the area, gaining control of the highest peak in the area, located to the south of Bilafond La. In April 1986, the Pakistanis established a military post on the peak and re-named the peak as “Quaid Post”. The Quaid Post was located at an altitude of 22,153 feet and was extremely difficult to attack, as it was surrounded by 457 m high ice walls. It had an inclination of 80° to 85° on three sides, and a little less on the fourth side. It was very difficult for the Indian soldiers to climb up the peak without getting noticed by the Pakistani soldiers stationed at the top.

In a provocative action, on 18 April 1987, the Pakistani troops at Quaid Post fired on the Indian soldiers at Sonam, killing two of them. The Indian Army then decided to launch an operation to occupy the Quaid Post. The 8th Battalion of the Jammu and Kashmir Light Infantry (8th JAK LI) was given the task of capturing the Quaid Post. As part of preparation of launching an attack on the Quaid post, it was decided to send a recce mission to identify the best possible route to the peak. 2nd Lt Rajiv Pandey was tasked to lead the mission with eight other soldiers. On 29 May 1987, as planned 2nd Lt Rajiv Pandey swung into action and commenced his arduous task in hostile weather conditions. The task involved negotiating a stretch of 3 kilometers in the open on the glacier face and thereafter a climb of a near vertical ice wall of 12000 feet.

2nd Lt Rajiv Pandey was given the gallantry award, “Vir Chakra” for his exceptional gallantry, determination and supreme sacrifice. He is survived by his mother Mrs Sankuntala Pandey.

The Citation of "Vir Chakra" awarded to him reads :

Second Lieutenant Rajiv Pandey, deployed in the difficult Siachen Glacier, was tasked to recapture a feature called "Left Shoulder" at a height of 21000 feet lying between two Indian posts. The task involved negotiating a stretch of 3 kilometers in the open on the glacier face and thereafter a climb of a near vertical ice wall of 12000 feet. The patrol of one officer and eight other ranks was inducted at the Post on 23 May 1987, for the operation. Second Lieutenant Rajiv Pandey using all his skill and motivation took his party inch by inch, crawling, traversing the unknown and impassable ice ridge within 25 metres of the adversary's first bunker and personally led his men to charge on the adversary. On 29 May 1987, the final assault of the young officer came under intense automatic fire of the adversary lulling all the five personnel including the leader. However, the courage and endurance shown by the officer and his men made subsequent capture of the adversary's position on 26 June 1987, possible. Thus Second Lieutenant Rajiv Pandey showed unparalleled courage and leadership and made the supreme sacrifice of his life.