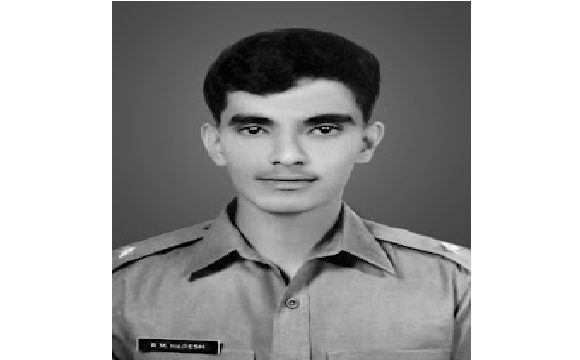 Second Lieutenant Radha Mohan Naresh hailed from Kerala and was born in the year 1950. Son of Smt D Subhadramma, he had two brothers, Gopi Mohan Naresh and Praveen Naresh as his siblings. 2nd Lt RM Naresh did his schooling from Sainik School Kazhakootam in Kerala. While studying in the Sainik School his inclination towards the Armed Forces grew and the foundation of his future military life was laid. His resolve to join the Army grew with the age and consequently, he got selected for the prestigious NDA after finishing school. He joined the 39th NDA course and later went to IMA Dehradun and became a part of 39th Course. He was commissioned as a Second Lieutenant at the age of 21 years.

He got commissioned into 9 Jat battalion of the Jat Regiment, an infantry Regiment well known for its dauntless soldiers and numerous battle exploits. Barely a week into service, 2nd Lt RM Naresh got involved into thick of operations as his unit was deployed on the western border, when the war with Pakistan erupted.

During Indo- Pak 1971 war 2nd Lt RM Naresh’s unit 9 Jat was deployed on the western border. The unit was deployed in Chhamb sector under the operational control of 10 Infantry Division. The Battle of Chamb of 1971 war was an epic feat of arms. It stood out as one of the most instructive battles of all three Indo-Pak wars in terms of operational strategy, small unit actions and handling of armour. The Chhamb sector was bounded by the ceasefire line/international border in the west and south, while a range of hills constituted its northern portion running roughly in an east west line. Some ridges, however, jutted downwards from this range of hills and ran along a north south alignment, most prominent of these being the Phagla Sakrana Bridge. As part of ongoing operations, a platoon of 9 Jat commanded by 2nd Lt RM Naresh was deployed to defend a locality.

On 10th Dec 1971, 2nd Lt RM Naresh's platoon was tasked to defend the Raipur crossing, on the Munawar Tawi river, where the Pakistani Army had launched a major infantry offensive. 2nd Lt Naresh led his platoon from the front, as they fought a valiant battle to hold the post, till reinforcements arrived. However while doing so, 2nd Lt RM Naresh received gun shots and got severely injured. He later succumbed to his serious injuries and was martyred. 2nd Lt RM Naresh was a valiant soldier and gritty officer who led from the front and laid down his life at the age of 21 years in the line of his duty.