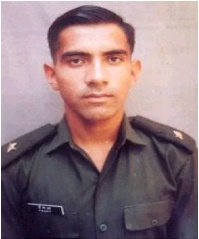 2nd Lieutenant Puneet Nath Datt was born on 29th April, 1973 in Jodhpur, Rajasthan. His father Major Pramod Nath Datt also served in the 1/11 Gorkha Rifles and was the reason 2nd Lt Puneet wanted to join the same regiment. His grandfather Col. S.N.C Bakshi also served in the Indian Army while his uncle V. K. C. Bakshi was a Commander in the Indian Navy. 2nd Lt Puneet had a brilliant academic career and took keen interest in sports and extra curricular activities. He did his schooling from St. Bethney’s School in Darjeeling, St Joseph’s Academy in Dehradun, St. Xavier’s School in Jaipur and finally completed his class XII from Tagore Public School in Jaipur. He also excelled in football and rowing whilst in school. Throughout his childhood, he nursed his ambition to join the Indian Army. As a little boy, he would don his grandfather’s or father’s uniform, complete with the Gorkha Hat and pretend to be an officer.

He was known as ‘Dikky’ amongst his friends. While still at High School, Dicky paid his full attention towards his goal in life, i.e. joining the Indian Army. Through his grit, determination and hard work, he secured entry in the NDA in December 1991. At NDA, he had a brilliant record and due to his proficiency in both academic & military subjects as well as outstanding officer like qualities, he was awarded the coveted rank of ‘Cadet Sergeant Major’ for his squadron – ‘Echo’. As CSM, he had won the prized Cross Country Shield for his squadron and was also awarded three Gold medals in rowing. So determined and full of zeal was he to join his father’s regiment that throughout his stay at the NDA, he used to proudly display the Gorkha crest, always polished, on his study table. He would often write back home that his spirits really soared whenever he met a Gorkha officer.

Within a short span of 1½ years after his commissioning, 2nd Lt Puneet successfully completed the Young Officers’ Course, Commando’s Course and Fire Fighting Course. During 1997, 2nd Lt Puneet’s unit was deployed in J & K and was engaged in counter insurgency operations. On 19 July 1997, his unit received informaiton form the intelligence sources about the presence of some hard core mercenaries in a village in Naushera, a place falling in its area of responsibility. A decision was taken by the unit to launch a search and destroy operation with a team led by 2nd Lt Puneet. He set out for the mission and very soon cordoned off the suspected building. It was a three-storey building with a compound wall which was being used as a hideout by the foreign militants.

On being challenged the militants fired at the troops thereby confirming their suspicion. The gun battle continued for three hours but the success seemed to be eluding the assault team. Then 2nd Lt Puneet decided for an audacious move and jumped over the wall of the house to get closer to the building. As he crossed over he ran into a militant trying to make a dash for freedom and shot him dead. Thereafter, 2nd Lt Puneet kept on lobbying the grenades at the first floor from where the last surviving militant was continuously firing. The militant too spotted 2nd Lt Puneet and fired at him but at that very moment, 2nd Lt Puneet let off a burst that killed the militant. However 2nd Lt Puneet got severely injured and was evacuated to the hospital. He later succumbed to his injuries and was martyred. 2nd Lt Puneet Nath Datt was a valiant soldier and a fine officer who laid down his life in the service of the nation at the age of 24 years.

2nd Lt Puneet nath Datt was given the nation’s highest peace time gallantry award, “Ashok Chakra” for his most conspicuous act of bravery, exemplary leadership and supreme sacrifice. His mother Mrs Anita Datt received the award on behalf of her brave son.

On 20 July 1997, Second Lieutenant Puneet Nath Datt was ordered to lead his company in the search operation. An information was received that a group of mercenaries were holed up in a house. 2/Lt Datt decided to begin the search from a suspicious-looking three-storeyed house that provoked the militants to fire back.

In a three hour long encounter, the fearless young officer kept taking pot-shots at the windows and lobbing hand grenades into the solidly-built house. 2/Lt Datt insisted on taking up the task of clearing the resistance.The moment he jumped over the wall of the house, he ran into a militant trying to make a dash for freedom and shot him dead.Thereafter, 2/Lt Datt kept on lobbying the grenades at the first floor from where the last surviving militant was continuously firing.The militant spotted 2/Lt Datt and fired at him but at that very moment, 2/Lt Datt too spotted him and let off a burst that killed the militant. 2/Lt Datt sustained grave injuries and was evacuated to the hospital. 2/Lt Puneet Nath Datt displayed courage and valour of the highest order and laid down his life for the country.

For this valiant and courageous act, 2/Lt Puneet Nath Datt was awarded the Ashoka Chakra posthumously.