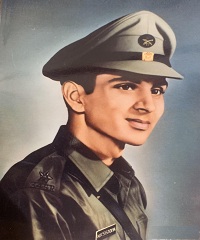 2nd Lt Nagarjun Sisodia was born in the year-1950 and spent the early part of his childhood in Nairobi in Kenya. Son of Shri Karsanbhai Jiwa Sisodia and Smt Rudiben Sisodia, 2nd Lt Nagarjun came back to India for his further education and joined the Rajkumar College in Rajkot in Gujarat. It was during this period that 2nd Lt Nagarjun became more aware of his community’s history and learned about many brave heroes including that of Shri Nathabhai Modhawadia, from his village Modhawada in Porbandar district of Gujarat, who had fought against the unjust rulers of his time.

Rajkumar college also laid the foundation for his interest in the armed forces, which grew with time. Consequently, he got selected to join the prestigious National Defence Academy Pune. Later he moved to the IMA (Indian Military Academy) Dehra Dun where he was commissioned as a Second Lieutenant. He was commissioned into 3/4 GR Bn of the 4 Gorkha Rifles regiment, an infantry regiment known for its gallant soldiers and numerous battle honours. Raised on 1st Oct 1940 3/4 GR had taken part in a number of operations before it was deployed for operations during 1971 war.

During 1971 war, 2nd Lt Nagarjun’s 3/4 GR Bn was deployed in the western sector to thwart the advance of Pakistani forces. The battalion was part of 10 Division of 15 Corps deployed in the Chhamb sector of J & K. In 1965, the Pakistanis had succeeded in capturing Chhamb with a surprise attack and in 1971 too, it was their one of the main objectives. 10 Division, under Major General Jaswant Singh, was deployed for the offensive and was fairly well-equipped, having four infantry brigades, two regiments of armour (9 Horse and 72 Armoured Regiment), two Engineer regiments, six regiments of artillery (two medium, three field and one light), besides elements of air defence and the usual ancillary units.

By 12th Dec 1971, 2nd Lt Nagarjun’s Bn had taken part in number of operations in the Chhamb Sector along with various infantry and armour units. Usually, a number of reconnaissance patrols were launched whenever possible to gather information about enemy deployment which could be used for subsequent attacks. 2nd Lt Nagarjun was leading one such reconnaissance patrol on the night of 12th Dec 1971. These patrols were fraught with risk and demanded a high level of courage and fieldcraft skills. As the patrol was underway enemy soldiers spotted their movement and attacked with sudden burst of fire. 2nd Lt Nagarjun received multiple gunshots and was seriously injured. However dispite being seriously wounded he managed to reach back to the unit location and passed on the vital information before collapsing. He later succumbed to his injuries and was martyred.  2nd Lt Nagarjun Sisodia was a gallant and determined officer who laid down his life at the age of 21-years in the service of the nation.