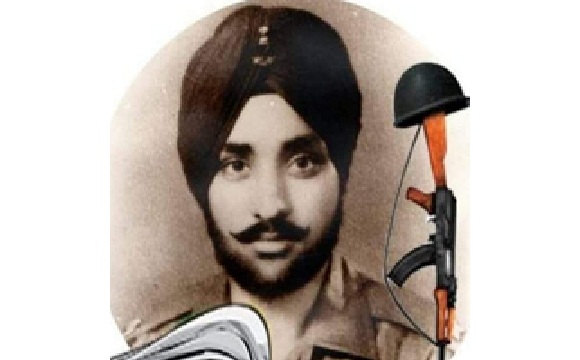 2nd Lt Manjeet Singh Cheema hailed from Shimali tehsil of Sargodha district in undivided Punjab(Now in Pakistan) and was born on 22 Oct 1942. Son of Shri Amar Singh Cheema and Smt Amar Kaur Bajwa, 2nd Lt Manjeet Singh completed his primary school at Litani. Thereafter he studied from Govt High School Narwana till his 10th class and passed out in 1958. Subsequently, he joined Govt college at Malerkotla for his graduation. It was at this place, that he developed an interest in sports and poetry. He became the editor of the college magazine and also received many scholarships over a period of time.

In the year 1963, he got selected for the Army and joined the prestigious IMA Dehradun. He was commissioned into the 1 JAK LI Battalion of the famed Jammu and Kashmir Light Infantry Regiment, a regiment known for its fearless soldiers and numerous battle exploits. After serving for some time, he got married to Ms Malkait Kaur on 18 Feb 1965. In the very early part of his service career, he got involved in active operations, when his unit got deployed on the western border as the war clouds gathered on the horizon in 1965.

During Sep 1965, 2nd Lt Manjeet Singh Cheema’s unit 1 JAK LI was deployed on the western border. Pakistan launched ‘Operation Gibraltar’ in Aug 1965, wherein thousands of infiltrators were sent across the border to carry out sabotage and subversion. Following the failure of Op Gibraltar, Pakistan invaded Chhamb district on 01 Sep 1965 triggering an aggressive response from the Indian forces. As part of an ongoing combat plan of action in the western sector, 1 JAK LI battalion was tasked for various assault operations in September 1965. 2nd Lt Manjeet Singh Cheema though young in service, became a part of various operations and proved his mettle as a soldier.

Just a day before the declaration of ceasefire, Pakistan launched a well-planned and determined attack on the battalion positions on 22 Sep 1965. The counterattack by 1 JAK LI was very fierce and was supported by artillery too. 2nd Lt Manjeet Singh went about directing and inspiring his troops without caring for his own safety.  The battalion succeeded in beating back the enemy attack successfully. However, 2nd Lt Manjeet Singh Cheema, while directing operations got seriously injured. He later succumbed to his injuries and was martyred. 2nd Lt Manjeet Singh Cheema was a gallant soldier and a gritty officer who laid down his life at the age of 22 years in the line of his duty.