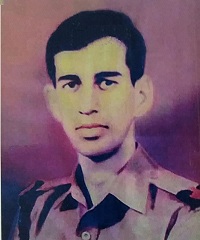 2nd Lt Makarand Raghunath Ghanekar hailed from Vile Parle in Mumbai in Maharastra. Born on 19th, Jul 1949, he did his schooling from the prestigious RIMC Dehradun. After completing his 12th standard he joined the NDA, Pune and passed out in the year 1969. He was commissioned as a 2nd Lieutenant into 5 Maratha LI of the Maratha Light Infantry Regiment, a Regiment known for its intrepid soldiers and various battle exploits. He was a keen sportsman during his school days as well as in training period and specially excelled in boxing and water-polo.

2nd Lt Ghanekar was proficient in Urdu and Arabic language and also underwent training in gorilla warfare. In a short span of time, 2nd Lt Ghanekar developed into a tough soldier and a fine officer with superior field craft skills. In the early part of his service career itself, he got opportunity to display his soldierly skills when his unit got deployed on the eastern front during the Indo-Pak war of 1971.

Though the Indo-Pak war officially commenced on 03 Dec 1971, when the Pakistani Air Force attacked 11 Indian Air Fields, the border skirmishes had started months before that when the refugees from across the border had started pouring in as a result of atrocities committed by the Pakistani forces. Prior to the outbreak of open hostilities, 5 Maratha LI had been engaged in a number of encounters during aggressive patrolling that had been undertaken. 2nd Lt Makarand Raghunath Ghanekar’s unit, 5 Maratha was deployed at Kotchandpur, about 30 km from Jessore.

After taking over Kotchandpur, in the middle of the night on 04/05 Dec 1971, 2nd Lt Ghanekar and his team went on a reconnaissance mission towards Elangi / Kaliganj. They found that the bridge on the Chitra river was blown off by the Pakistani army to restrict the advance of the Indian army. The team went further ahead near a village where as a precautionary measure, 2nd Lt Ghanekar launched a grenade. Since this action did not evoke any response from the enemy, they assumed that the area was clear and proceeded towards a nearby lake.

However, here the reconnaissance team came under attack from the enemy forces. 2nd Lt Ghanekar in a courageous retaliatory action, managed to kill a senior officer of the Pakistani army. 2nd Lt Ghanekar and his team had to engage in a close combat with the enemy soldiers and during this fight he was hit on the head by a rifle butt. Unfortunately, he fell in the lake after the hit and was martyred at the age of 22 years. The enemy army unit located at Elangi thought that they were being encircled from Kotchandpur and Kaliganj side and therefore escaped. The next morning the Indian army unit moved ahead and took over positions without any fight. 2nd Lieutenant Ghanekar was given the gallantry award, “Shaurya Chakra” for his courageous action and self sacrifice.

2nd Lt Makarand Raghunath Ghanekar was a gallant and committed soldier who laid down his life at the age of 22 years, in the service of the nation.