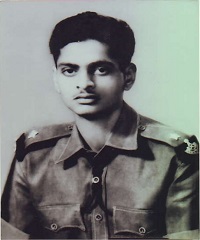 Second Lieutenant Lingangouda Kenchangouda Nadgir born on 2nd Feb 1941 was brought up in Belgaum in Karnataka State (then Mysore). Son of Shri Ranganath Deshpande and Smt Shakuntala Deshpande, 2nd Lt LK Nadgir had five sisters and a brother as his siblings. 2nd Lt LK Nadgir’s father served with Royal Indian Air Force and took part in operations during WW-II. Inspired by his father, he showed inclination to join the Armed Forces since his younger days. He continued to follow his passion and eventually after completion of his intermediate Commerce from the then College of Commerce Belgaum (presently Gogte college of commerce) he got selected to join the Army.

He got commissioned as a 2nd Lt in the Indian Army in the year 1964. He was commissioned into 6 MLI of the Maratha Light Infantry Regiment, a Regiment known for its intrepid soldiers and numerous battle exploits. As the war clouds gathered in the horizon in 1965, 2nd Lt LK Nadgir’s unit got deployed in the western sector. Thus very early in his service career, 2nd Lt LK Nadgir got involved in thick of active operations.

During Sep 1965, 2nd Lt LK Nadgir was serving with 6th Maratha LI, under the command of Lt Col Mathew Manohar. The unit was functioning under the operational control 35 Infantry Brigade of the 6th Mountain Division. The Brigade’s objective (Operation Nepal) was to capture Chawinda town in Pakistan where Pakistan’s 6th armored division was stationed. Capturing Chawinda railway station was part of Operation Nepal, which was entrusted to  6th Maratha LI.

The troops comprising two companies of 6 MLI  made an all out assault to capture the Chawinda railway station very ably led by their commanding officer Lt Col Mathew Manohar. 2nd Lt L K Nadgir as intelligence officer played a crucial role in this attack and the troops could successfully capture the railway station by the first light of 19th September 1965. However, the capture of the railway station was not tenable without the support of other battalions of 35 Inf Bde. The other two battalions of 35th Infantry Brigade could not reach Chawinda Railway station that night and as a result two companies of 6th Maratha LI were left to defend the station by themselves. Indian tanks and artillery could not reach Chawinda railway station in time to support 6 Maratha LI troops.

Consequently, the 6 Maratha Li troops had to face the onslaught of Pakistani tanks and artillery with limited resources. 2nd Lt L K Nadgir got severely injured in the intense Pak shelling and was martyred. The Commanding Officer of the 6th Maratha Li, Lt Col Mathew Manohar also attained martyrdom. 2nd Lt LK Nadgir was a committed soldier and a fine officer who laid down his life at the young age of 24 years in the service of the nation.

The then GOC Western Command Lt Gen Harbakshan Sing VrC writes about battle of Chawinda in his WAR DESPATCHES at para 115 page 208,209 ..   ” The division mounted the attack as planned on night 18/19th September 1965. However, probably on account of lack of proper security, the element of surprise had been lost. The enemy started shelling the forming up places while the troops were being marshaled for the attack. The operation was, in consequence, dislocated from the very beginning. 116. However, 35 Infantry Brigade did achieve partial success in its assault. 6 Maratha Light Infantry were able to capture their objective by 0400 hours.”

Hon Captain and Subedar Major (Retd) Ramchandra Paste who was then a Sepoy in the 6 Maratha still recalls with pride that the entire Chawinda Railway station and surroundings reverberated with ‘SHIVAJI MAHARAJ KI JAI’ the maratha battle cry on that fateful night. “

The manner and circumstances leading to their martyrdom on that fateful night are narrated by Maj General Yashwant Deva, the then the Brigade Major attached to the 35 Infantry Brigade, in his book SAGA OF GRIT AND COLD COURAGE published on the net in 2015. “Code named ‘Abhimanyu’ for securing the Phase 1 objective (namely capture of Chawinda Railway Station in Pakistan) and heading for Phase 2 objective was the last we heard. The VHF radio set carried by the intelligence officer Second LT L K Nadgir went dead and a dynamic leader Lt Col Manohar and a promising youngster were martyred on their way to phase 2 of the objective.

Lt Col Manohar and two companies of 6 Maratha had entered the enemy defended box as Veer Abhimanyu had penetrated the Chakra-viyuhas in Mahabaratha. They sacrificed themselves in the finest traditions of the profession of soldering.” (Page 31 of Yashwamt Deva’s book) May be because of this Major General Yashwant Deva has dedicated his book Saga of Grit and cold courage to the Forgotten martyrs of 35 Infantry Brigade, who, he says, sacrificed their sarvassva (the entire) — the existence, even remembrance. “Close to 0400 hours or so, code word Abhimanyu was received from Lt Col Manohar. It bucked up my morale but it was momentary and all communication went dead. A splinter had pierced the relay radio set. It was abandoned. I lost communication control with the assaulting battalions.” (Page 32 ibid)