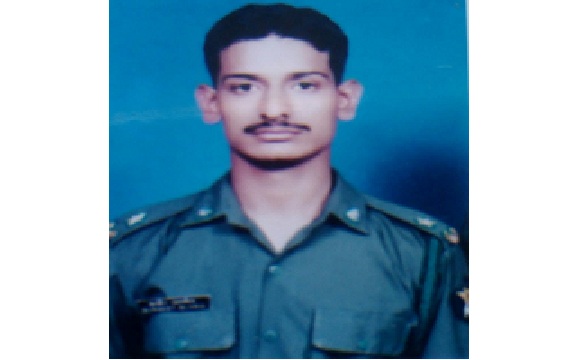 Second Lieutenant Gurdeep Singh Salaria hailed from Narainpur village of Pathankot district in Punjab and was born on 28th Feb 1973. Son of an Army veteran Lt Col Sagar Singh Salaria and Smt Trupta Salaria, he always wanted to follow in the footsteps of his father and serve in the Armed Forces. After completing his 12th class, he got selected to join the NDA in July 1990. He later went to IMA Dehradun for further training and passed out in 1994. He was commissioned into the 23 Punjab battalion of the Punjab Regiment, an infantry regiment well known for its gallant soldiers and numerous battle honours. Incidentally his father too served in the same battalion and it was a proud moment for him to join the battalion of his father.

During Jan 1996, 2nd Lt GS Salaria’s unit 23 Punjab was deployed in Pulwama district in J&K and was engaged in operations against the militants on a regular basis. By Jan 1996, 2nd Lt Salaria had completed nearly two years in the unit and had already taken part in many successful operations. On 10 Jan 1996, the security forces received credible information from the intelligence sources about the presence of terrorists in Panjgam village of Pulwama district. Based on the intelligence inputs the unit decided to launch a search and destroy operation in the suspected area in its AOR(area of Operation).

The assault team led by 2nd Lt GS Salaria reached the suspected area as planned and launched the operation. Soon the troops made contact with the terrorists and cornered them. On being challenged the terrorists opened fire and a fierce gun battle ensued thereafter lasting for several hours. 2nd Lt GS Salaria  and his comrades managed to eliminate three hardcore terrorists. However, during the heavy exchange of fire, 2nd Lt GS Salaria too received gun shots and was severely injured. He later succumbed to his injuries and was martyred. 2nd Lt GS Salaria  was a valiant soldier and a fine officer who led from the front and laid down his life at the age of 23 years in the service of the nation, following the highest traditions of the Indian Army. 2nd Lt GS Salaria was given the gallantry award, “Shaurya Chakra” for his exceptional courage, devotion to duty, and supreme sacrifice.