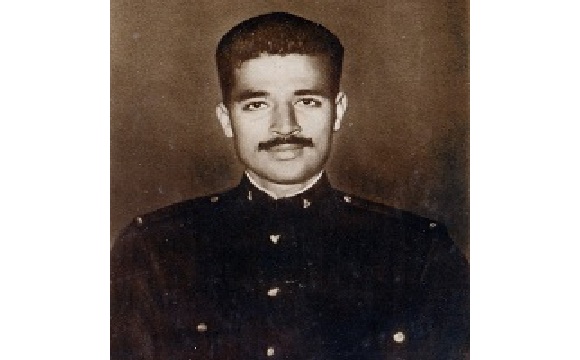 2nd Lieutenant Gopal Krishna Venkatesa Prasanna Rao hailed from Coimbatore in Tamil Nadu and was born on 15 Oct 1940. Son of Dr TAGK Rao, he did his initial schooling in Board High School at Sulur in Tamil Nadu. Later he studied from PSG Arts College at Coimbatore and Madhura College at Madurai. He was inclined to join the Armed Forces since his younger days and continued to follow his passion while growing up.

Eventually, he got selected to join the Army and was commissioned as an officer on 10 June 1962 at the age of 21 years. He was commissioned into 4 Grenadiers of the Grenadiers Regiment, an infantry regiment with a rich history of gallantry and battle honours. Very early in his service career, he got involved in the thick of operations as border tension arose with China in 1962. As the situation in the north east worsened and war looked imminent, 2nd Lt GKV Prasanna Rao's unit 4 Grenadiers was inducted in the north east in the year 1962.

During the 1962 Indo-China war, 2nd Lt GKV Prasanna Rao''s unit 4 Grenadiers was deployed on the Khinzemane Sector of the NEFA sector. The unit troops were deployed at a forward area near Nam Ka Chu river. After the Chinese incursion at Dhola post in Sep 1962 and subsequent developments, 4 Grenadiers battalion was ordered to withdraw from the forward posts in NEFA.  As a result, a withdrawal plan was put into action and the troops were deployed to facilitate a safe withdrawal of men and material. The Chinese, approximately a company strong, had established themselves on the opposite bank of the Nam Ka Chu river and had cut the withdrawal route by dominating the track leading back to Hathung La. 2nd Lt GKV Prasanna Rao was functioning as a Company Commander of a company that was given the responsibility to facilitate a safe withdrawal of troops.

On 20 October 1962, 2nd Lt GKV Prasanna Rao's defended locality was shelled,' and heavily assaulted by an enemy infantry battalion supported by mortars. Although greatly outnumbered, 2nd Lt GKV Prasanna Rao led his company to withstand repeated enemy attacks. To make the matters worse, the enemy mortars had destroyed the bridge over the Nam Ka Chu river. In spite of being cut off, 2nd Lt GKV Prasanna Rao continued to fight gallantly along with his men. As the situation demanded, he even took charge of a light machine gun and continued to hold the position. However during the fierce exchange of fire, he got seriously injured and was martyred.

2nd Lt GKV Prasanna Rao during the operation showed outstanding gallantry in the face of the enemy with utter disregard to his personal safety and laid down his life in the line of his duty. He was given the gallantry awarded “Maha Vir Chakra” for his raw courage, fighting spirit, devotion to duty and supreme sacrifice.

2nd Lieutenant GKVP Rao was in command of a company in the Khinzemane Sector of NEFA. On 20 October 1962, his defended locality was shelled,' and heavily assaulted by an enemy infantry battalion supported by mortars. Although greatly outnumbered, his company withstood repeated enemy attacks. No withdrawal was possible because the enemy mortars had destroyed the bridge over the unfordable Nam Ka Chu. In spite of being cut off, 2nd Lieutenant GKVP Rao continued to fight gallantly. He personally manned a light machine gun and continued to hold the position at the cost of his life in keeping with the highest traditions of the service, thus setting a high example of leadership and courage.