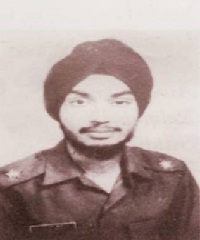 Place of birth : Bareilly (UP)

2nd Lt  Amardeep Singh Bedi hailed from Bareilly in Uttar Pradesh and was born on 25 Jun 1966. He was commissioned into the Madras Engineer Group (MEG), informally known as the Madras Sappers, an engineer group of the Corps of Engineers, the important combat support arm of Indian Army. The Madras Sappers with its HQs at Bangalore, are the oldest of the three groups of the Corps of Engineers. Very early in his service career, 2nd Lt  Amardeep Singh Bedi got involved in active operations, when his unit got deployed as part of IPKF in Sri Lanka.

During Jan 1989, 2nd Lt  Amardeep Singh Bedi was serving with 417(I) Field Coy of MEG(Madras Engineering Group) and was deployed in Sri Lanka as part of IPKF. Pursuant to the Indo-Sri Lankan Accord, Indian forces were inducted into Sri Lanka in August 1987 to disarm various militant groups that were disrupting peace in the land. The dreaded LTTE—known for its guerrilla warfare—refused to disarm and attacked the IPKF, forcing the IPKF to launch several combat operations to quell the militants. The IPKF launched the operation, code-named “Op Pawan” with a mandate to neutralize the operational capability of the LTTE in and around Jaffna. The aim was to render the rebel movement directionless in the face of the impending assault on the LTTE strongholds by the IPKF. Initially only 54 division of the Army was inducted but the escalation of the operations brought three more divisions 3, 4 and 57 into the conflict. By Jan 1989, Indian forces had undertaken numerous operations against LTTE but the war was far from over.

Based on the information from the intelligence sources, 2nd Lt  Amardeep was tasked to carry out a search operation to find and neutralize the suspected LTTE militants on 18 Jan 1989. While carrying out a search of the jungle adjacent to a lagoon 2nd Lt  Amardeep  spotted few militants trying to cross the lagoon at a distance of 700 metres. With a view to cutting off the escape route, he manoeuvred his boat to close in on the militants. He engaged the escaping militants and succeeded in killing one, possibly killing or injuring three others and thus prevented the militants form escaping.

2nd Lt Amardeep Singh Bedi  was given the gallantry award, “Vir Chakra” for his outstanding grit, determination, devotion to duty and supreme sacrifice.

The citation for the “Vir Chakra” awarded to him reads :

On 18 January 1989, Second Lieutenant Amardeep Singh Bedi, while carrying out a search of the jungle adjacent to a lagoon in Sri Lanka, spotted few militants trying to cross the lagoon at a distance of 700 metres. With a view to cutting off the escape route, he manoeuvred his boat to close in on the militants. He engaged the escaping militants and succeeded in killing one, possibly killing or injuring three others and thus prevented the militants form escaping.
While Second Lieutenant Bedi was moving through a narrow channel another group of 10 to 15 militants waiting to cross the lagoon brought down a heavy volume of fire including General Purpose Machine Gun fire on his boat, which was barely 70 metres away from the bank. During the exchange of fire, Second Lieutenant Bedi and two Other Ranks were hit and succumbed to their injuries.
Throughout the operation, Second Lieutenant Bedi displayed initiative, conspicuous courage, leadership qualities and devotion to duty. The plan made by him succeeded in effectively confining the militants to the small jungle strip and his gallant action prevented their escape through the lagoon.