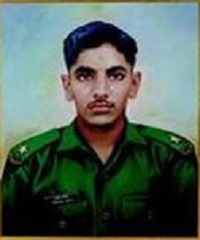 2nd Lieutenant Rakesh Singh was born on 18th Sept 1970 in a military family in Chandigarh. Son of an Army veteran Col Raj Singh and Smt Savitri, 2nd Lt Rakesh was passionate about army life and always wanted to follow in the footsteps of his father since his childhood. Youngest of the three siblings, 2nd Lt Rakesh did his early school education from Saint Joseph’s Boys High School Kirkee, Pune and later on studied in Model School Rohtak. He continued to work hard towards his goal and got selected in the prestigious NDA. He joined the 79th course of NDA and got commissioned on 13 June 1992. He was commissioned into 22 Grenadiers of the Grenadiers, an infantry regiment known for its valiant soldiers and numerous battle honors.

During 1992, 2nd Lt Rakesh’s unit 22 Grenadiers was deployed in J & K for counter-insurgency operations. As the unit’s area of operation was the hotbed of militant activities, the unit troops had to maintain a very high state of alert and often undertook operations against the militants. In one such operation, on the 5th of December 1992, 2nd Lt Rakesh as the commander of ‘B’ company was given the responsibility for blocking the escape of eight terrorists. The terrorists had carried out an attack in Shopian tehsil in Pulwama district and were escaping to their hideouts. While organizing his troops at Paadarpur village’s west area, 2nd Lt Rakesh received information at around 7 am from another company that the terrorists had reached the south of the village after fleeing from the attack site.

Though 2nd Lt Rakesh was short of troops, he immediately rushed to spot to block their escape. On being challenged, the terrorists attacked 2nd Lt Rakesh and his troops with automatic weapons, but unfazed 2nd Lt Rakesh counter attacked and killed two terrorists. Facing a determined attack from the troops, the terrorists started to flee, but one of the soldiers of 2nd Lt Rakesh’s company blocked the escape route. On seeing his soldier in danger, 2nd Lt Rakesh attempted to reach a vantage point to attack and ran through the barrage of fire. 2nd Lt Rakesh got hit by bullets in his shoulder and arm in this process, but he got up and fired back killing three more terrorists.

Inspired by the outstanding courage of their young company commander, the unit fought back with double vigor and killed three more terrorists. The mission was thus successfully completed by the unit under the inspiring leadership and daredevilry of 2nd Lt Rakesh. 2nd Lt Rakesh later succumbed to his injuries and was martyred. 2nd Lt Rakesh was awarded the nation’s highest peacetime gallantry award, ” Ashok Chakra” for his raw courage, leadership and supreme sacrifice.

The Citation of Ashok Chakra awarded to him reads:

On 5th December 1992, 2/Lt Rakesh Singh’s company was assigned the task of cutting off escape route of eight fleeing Afghan Mujahedeen, flushed out during operation. In the process, exemplifying the spirit of aggressiveness he single-handedly killed five of retreating Mujahedeen before succumbing to fatal injuries sustained during the operation. In recognition of his brave and selfless act he was awarded posthumously the nation’s highest peace time gallantry award the “Ashok Chakra”.