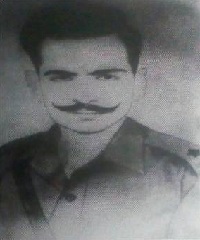 2nd Lt Vinod Kumar Goswamy was born on 9th July 1941 in Prayagraj district of Uttar Pradesh. Son of Shri JL Goswamy and Smt Kaushalya Devi Goswamy, 2nd Lt Vinod Kumar Goswamy was commissioned into the Garhwal Rifles on 18th December 1960 at the age of 19 years. As the situation in the north east worsened and war looked imminent, 2nd Lt Goswamy’s unit 4 Garh Rif was inducted in the north east in the year 1962.

By late Oct 1962, 2nd Lt Vinod Kumar Goswamy’s unit was put under the command of 62 Infantry Brigade along with other battalions which included 1 Sikh, 13 Dogra, 2 Sikh LI and 4 Sikh LI. The unit was deployed near Se-la pass after 4 Div had withdrawn form Tawang and got redeployed south of Mago Chu river in  NEFA, the present day Arunachal Pradesh. On 13 Nov 1962, 2nd Lt Vinod Kumar Goswamy was leading a patrol and had moved into Mago region under the cover of thick vegetation to observe Chinese movements around Rho. In the evening of 13 Nov 2nd Lt Goswamy observed that about 20 Chinese soldiers approached a hut near the north bank of Mago Chu and decided to settle there for the night.

2nd Lt Goswamy decided to take the Chinese on in a daring move. After dark, 2nd Lt Goswamy along with his seven men moved downstream and managed to cross the large stream by using logs between rocks to construct a makeshift bridge. In the hut the Chinese soldiers were quite relaxed as they had not noticed any aggressive move by Indian troops till then. A lone sentry was on duty some yards away from the hut. 2nd Lt Goswamy and two of his men got closer and grabbed the sentry while hitting him on his head with a rifle but. The scuffle, however, brought another Chinese soldier out of the hut and though he fired, 2nd Lt Goswamy in a swift action bayoneted him. The covering party of the patrol then started firing and throwing hand grenades as a result of which there was confusion in the hut as well as in the village.  2nd Lt Goswamy realizing that it would not be possible to drag the sentry away, decided to kill him. The patrol party returned to Headquarters in the morning of the 15th Nov 1962.

2nd Lt Goswamy’s unit 4 Garhwal was deployed at Nuranang with Alpha and Delta companies dominating the winding road that came up from Jang area. The Alpha company under the command of 2nd Lt Surinder Nath Tandon came under attack from the Chinese soldiers on 16 Nov 1962. The forward  platoon under Sub  Udai Singh Rawat was the most affected as the main thrust of the Chinese had been aimed at the Platoon. The Chinese were attacking with mortars and artillery guns and the Alpha company was running out of ammunition. At this juncture a message was relayed to the Battalion HQ asking for more ammunition. 2nd Lt Goswamy volunteered to carry the required ammunition to Sub Udai Singh’s Platoon. The Alpha company having received the critical ammunition repulsed the multiple Chinese attacks thereafter. However during the withdrawal of the company on 17 Nov 1962, 2nd Lt Goswamy got seriously injured and was martyred.

2nd Lt Vinod Kumar Goswamy during the operation showed outstanding gallantry in the face of the enemy with utter disregard to his personal safety and laid down his life in the line of his duty. He was given the gallantry awarded “Vir Chakra” for his raw courage, fighting spirit, devotion to duty and supreme sacrifice.

On 14th November 1962, 2/Lt. Goswamy was detailed to observe the activities of the Chinese on the north side of river Towang Chu in NEFA and if possible to capture a Chinese prisoner. He led his patrol through thick jungle and established a base south of the river. In the evening, he noticed 20 Chinese soldiers stopping near a hut in village RHO and settling down for the night.

After dark, 2/Lt. Goswamy took seven men with him and crossed the river. Some time later, he led his patrol towards the hut. 2/Lt. Goswamy observed a man sitting near the trail who he soon discovered was a Chinese sentry. Proceeding quietly towards him along with a rifleman, he pounced upon him and snatching his rifle muffed his mouth with a towel. The scuffle, however, brought another Chinese soldier out of the hut and though he fired, 2/Lt. Goswamy bayoneted him. Our covering party then started firing sten guns and throwing hand grenades as a result of which there was confusion in the hut as well as in the village. 2/Lt. Goswamy realizing that it would not be possible to drag the sentry away hit him on the head with the hut of the captured rifle and started withdrawing to his base. He was not seen thereafter. The rest of the party returned to Headquarters on the morning of the 15th November, 1962.

In this action, 2/Lt. Vinod Kumar Goswamy displayed exemplary courage, initiative and leadership in the best traditions of the Indian Army.