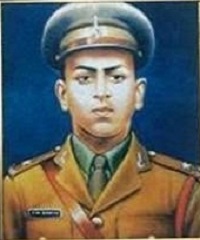 2nd Lt Pollur Mutthuswamy Raman was born on 04th December 1934 in north Arcot district of Tamil Nadu. Son of an Army officer, Maj Mutthuswamy from the  Army Medical Corps and Mrs Savitri, 2nd Lt Raman was the second among seven siblings. 2nd Lt Raman had his earlier education in Burma and later he studied from Saraswati High School and Wadia college Pune. He was a brilliant and soft-spoken and was very much liked by teachers and students alike.

In the year of 1950, 2nd Lt Raman completed his SSC examination and while in his first year at college , he got selected in National Defence Academy. He was commissioned into the Army as 2nd Lt in the year 1955 at the age of 21 years.  He was commissioned into the Sikh Light Infantry Regiment, a regiment known for its fearless soldiers and various battle honours. As his first assignment 2nd Lt Raman got posted to NEFA(North East frontier Agency), the present day Arunachal Pradesh.

On 02 June 1956, 2nd Lt Raman’s unit received information from intelligence sources about the presence of Naga militants in Chephema village in Nagaland.  After assessing the situation, it was decided to launch an operation to nab the militants at the earliest. Consequently an assault team led by 2nd Lt Raman swung inot action in the early morning of 03 June 1956 as per the plan. 2nd Lt Raman and his troops reached the suspected area at around 5 am in the morning. Soon the troops spotted the militants, who opened fire at them on being challenged.

The militants were heavily armed and were using light machine guns, sten guns, and rifles. As it was foggy and dark, it was very difficult to ascertain the positions of the militants. But, suddenly 2nd Lt Raman spotted the movement in a near by hut and rushed towards it. He then in swift and courageous action fired and killed two militants. In the meantime one of the militants threw a hand grenade at him, which fortunately did not harm him as he was able to escape in the nick of the time.

2nd Lt Raman continued to fire and killed one more militant before he found himself surrounded by militants from all the sides. One of the militants threw another grenade towards him which blew one-yard away from him breaking his hat broke and wounding him. Undeterred he continued his onslaught causing panic among the militants. Sensing defeat, some of the militants  started to flee from the spot, but 2nd Lt Raman chased them and killed one more militant. However one of the  militants emerged from his hiding position and sprayed bullets on him severely injuring him. Even this did not deter him and he threw a grenade at another militant killing him. He continued to give orders and directing fire till he fell unconscious. 2nd Lt Raman later succumbed to his injuries and was martyred before he could turn 22 years. His bold and courageous actions inspired his troops and they finally succeeded in destroying the den of militants and completing the assigned task successfully.