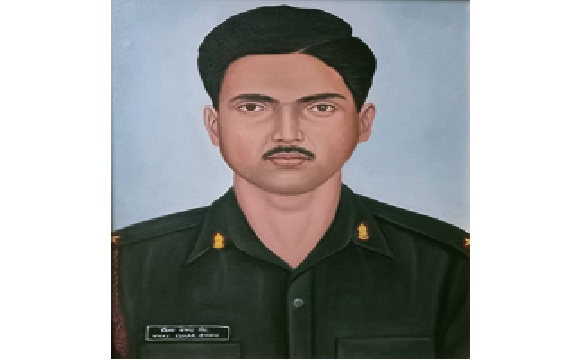 Second Lieutenant Vinay Kumar Singh hailed from Chennai in Tamil Nadu and was born on 03 Dec 1972. After completing his schooling, he got selected to join the NDA in July 1990. He later went to IMA Dehradun for further training and passed out on 11 Jun 1994 as a Second Lieutenant at the age of 21 years. He was commissioned into the 225 Med Regt of the Regiment of Artillery, an important combat support arm of the Indian Army.

After joining his unit 2nd Lt Vinay Kumar Singh went for Young Officers' Course and secured ‘A’ grading with second rank in the course.  2nd Lt Vinay developed into a committed soldier and gritty officer in a short time. He was a keen sportsman and excelled in creative arts as well.

On 16 Apr 1995, 2nd Lt Vinay Kumar Singh was inducted along with his team in Siachen Glacier as part of for ‘Op Meghdoot’. 2nd Lt Vinay and other troops deployed at the Glacier were braving the hostile weather as well as the enemy across the undefined border. Besides facing extreme weather conditions, 2nd Lt Vinay and his troops had to deal quite often with unprovoked firing from the enemy forces.  On 27 May 1995, he was inducted as an OP officer on DAS Post at Siachen Glacier. 2nd Lt Vinay carried out his duty as an OP officer very effectively causing massive destruction of the enemy assets while retaliating to the cross border firing.

In another case of cease fire violation, the enemy launched unprovoked firing on 3rd July 1995 at Indian posts. The small arms fire from the enemy was accompanied by artillery shelling which proved the fact that it was a well-planned move by the enemy. The Indian forces also swung into action to give a befitting reply and 2nd Lt Vinay as OP Officer, engaged enemy targets with a reckoning effect. The enemy in turn carried out the retaliatory attack on the Observation Post. 2nd Lt Vinay ordered his OP team to move to the bunker and without caring for his own safety moved out in the open for better observation of his own Arty fire. However 2nd Lt Vinay got hit by an enemy Arty shell splinter and was severely injured. He later succumbed to the injuries and was martyred. 2nd Lt Vinay Kumar Singh was a dedicated soldier and a fine officer who laid down his life at the age of 22 years in the service of the nation.

2nd Lt Vinay Kumar Singh was given the gallantry award, “Sena Medal”  for his exceptional courage, devotion to duty, and supreme sacrifice.