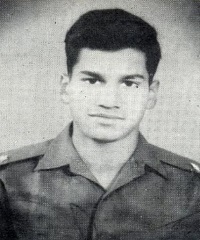 2nd Lt Vikas Prabhakar Sapatnekar hailed from the state of Maharashtra and was born on 06 Jun 1947. A second generation officer, 2nd Lt Sapatnekar, had imbibed all the qualities of an army officer right from his young age. Son of a Brigadier and having elder brother also serving in the Army, 2nd Lt Sapatnekar knew his calling too was in the armed forces. Eventually he got selected to join the NDA and was commissioned on 25 Dec 1966 into 113 Mountain Engineer Regiment, of the Corps of Engineers, an important combat support arm of the Indian Army. The exuberance, dedication and cheerful demeanor of 2nd Lt Sapatnekar endeared him to his juniors and seniors as well. He was fondly called by his unit mates by his nickname " SPUTNIK", a name by which he is still referred to, by his parents and fellow officers.

2nd Lt Sapatnekar's 113 Engr Regt right from the beginning had to undertake operational tasks in rough and inhospitable terrain in 8 Mountain Division area of responsibility. These included numerous reconnaissance missions carried out for bridge sites and roads in Nagaland area. 2nd Lt Sapatnekar was always on the forefront performing these tasks and cheerfully volunteered for them despite the danger posed by both the terrain and hostile rebels of the region.

During March 1968 2nd Lt Sapatnekar's unit was deployed in the north east as part of 'Op Orchid". The AOR(Area of Responsibility) of the unit was active with militancy during that time. Before the formation of the Mizoram state in 1987, there were Mizo-dominated areas in Mizo district of the Assam state. The Mizo organizations, including the Mizo Union had long complained of step-motherly treatment at the hands of the Assam Government, and demanded a separate state for the Mizos. The growing discontent with the Government ultimately had resulted in a secessionist movement led by Mizo National Front (MNF). The extremist section within MNF advocated the use of violence to seek independence from India. A special armed wing called the Mizo National Army (MNA) was created for the purpose. The MNA consisted of eight infantry "battalions" organized on the pattern of the Indian army. The MNA rebels often would target Indian Army troops as part of their armed rebellion.

As part of the operational plan, 113 Engr Regt was given a crucial task of constructing a bridge in their AOR. In order to execute the given task an exhaustive reconnaissance operation was planned by the unit. On 03 March 1968, Major SB Jadhav, Company commander of 358 Field Company along with 2 Lt V P Sapatnekar and a party of one Junior Commissioned Officer and 14 other ranks commenced reconnaissance for a suspension foot bridge in the interior of Mizo Hills. The onerous task of the reconnaissance continued for a period of nearly 15 days, as the terrain of the region made it extremely difficult to plan the site and the transportation of stores to commence the construction of the bridge.

2nd Lt Sapatnekar  was a valiant soldier and gritty officer, who laid down his life in the line of his duty before he could even turn 21. The bridge was later completed by the regiment in Mizo Hills has appropriately been named as 'Vikas Bridge" in the memory of  2nd Lt Vikas Prabhakar Sapatnekar.