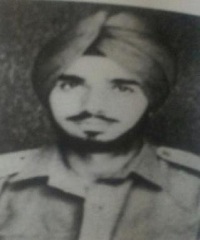 2nd Lt Shamsher Singh Samra hailed Pakhoke village in Tarn Taran district of Punjab and was born on 10th June 1945. Son of Shri Gurdeep Singh Samra, he did his schooling from DAV School Shimla. After his graduation he got selected to join the Army as a short service commissioned officer. He joined the No 08 SS course at Officers' Training Academy (OTA) and passed out on 15 March 1970 at the age of 24 years.

He got commissioned into 8 Guards battalion of the Brigade of Guards, an infantry Regiment with a glorious history of valour and battle honours. Barely one and half years into service, 2nd Lt Shamsher Singh Samra got involved into thick of operations as his unit got deployed on the eastern border, when the war with Pakistan became imminent.

During Indo- Pak 1971 war 2nd Lt Shamsher Singh Samra’s unit 8 Guards was deployed in the Eastern Sector. The unit was deployed near Hilli a strategic border town of the erstwhile East Pakistan under the operational control of 202 Mountain Brigade. The Battle of Hilli, one of the most decisive battles of 1971 and will go down in the annals of the history of the Indian Army as one of the most ferocious battles ever fought by a gallant band of soldiers from highly motivated units. 202 Mountain Brigade functioning under operational control of 20 Mountain Division was tasked to capture Hilli in November 1971. The battle of Hilli turned out to be the most savagely fought battle in the Eastern sector. The battle of Hilli was fought over two phases; first from 22 Nov to 24 Nov and second phase from 10 Dec to 11 Dec 1971. However the final surrender of Pakistani forces in Hilli took place on 18 Dec 1971. 2nd Lt Shamsher Singh Samra’s unit 8 Guards along with 5 Garhwal and 22 MLI were committed by 202 Mtn Bde for this battle with the support of Artillery and armour.

The main objective of the battle was to capture Bogra, thereby cutting off Pakistani forces in the North from the rest of East Pakistan. The best way of reaching Bogra was through Hilli. 2nd Lt Shamsher Singh Samra was functioning as a platoon commander of the A company commanded by Maj Hemant Manjrekar. During the battle 2nd Lt Samra's troops came under heavy and accurate fire from automatic weapons. Undaunted by the heavy volume of fire, he encouraged his men to press home the attack. When 2nd Lt Samra was about 25 yards from the position, he received a medium machine gun burst in the chest and was seriously wounded. But undeterred, he charged and destroyed the medium machine gun bunker with a grenade. He thereafter rushed to a second bunker, when he was hit by another burst. As a result he collapsed on the battle field with the grenade still in his hand. 2nd Lt Shamsher Singh Samra was a gallant soldier and a gritty officer who led from the front and laid down his life at the age of 26 years in the line of his duty.

Second Lieutenant Shamsher Singh Samra was a platoon commander in a battalion of the Brigade of Guards engaged in action on the Eastern Front. During the action our troops came under heavy and accurate fire from automatic weapons. Undaunted by the heavy volume of fire, Second Lieutenant Shamsher Singh Samra encouraged his men to press home the attack. When the officer was about 25 yards from the position, he received a medium machine gun burst in the chest. Undeterred, he charged and destroyed the medium machine gun bunker with a grenade; he then rushed to a second bunker, when he was hit by another burst as a result of which he died with the grenade still in his hand.

In this action, 2nd Lieutenant Shamsher Singh Samra displayed conspicuous bravery and determination and made the supreme sacrifice.