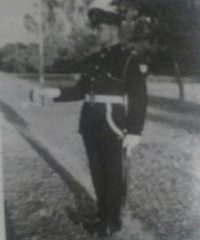 2nd Lt Sheshanna Manjunath was born on 23rd February 1945 in Chikmagalur district of Karnataka. Son of Shri  A Sheshanna and Smt R.G. Shantamma, he joined the army at the age of 24 years in the year 1970. He was commissioned into 21 Rajput battalion of the famed Rajput Regiment, an infantry Regiment known for its valiant soldiers and numerous battle honours. Very early in his service career, he got involved in the thick of operations as border tension arose with Pakistan in 1971.

Though the Indo-Pak war officially commenced on 03 Dec 1971, when the Pakistani Air Force attacked 11 Indian Air Fields, the border skirmishes had started months before that when the refugees from across the border had started pouring in as a result of atrocities committed by the Pakistani forces. Prior to the outbreak of open hostilities 21 Rajput battalion had got deployed on the eastern border and had been engaged in a number of operations during aggressive patrolling that had been undertaken. 2nd Lt Sheshanna Manjunath’s unit, 21 Rajput was deployed in Pachagarh-Thakurgaon district in the eastern sector of Bangladesh.

As part of ongoing operations, on 3 December 1971, 21 Rajput battalion was advancing along the axis Pachagarh Thakurgaon in the Eastern Sector. 2nd Lt Manjunath was commanding the leading platoon. As the advance was in progress, the enemy opened up with a medium machine gun inflicting heavy casualties on our troops. Realizing the gravity of the situation, 2nd Lt Manjunath sensed that it was imperative to silence the enemy machine gun. In a daring move 2nd Lt Manjunath charged at the machine gun post. However while doing so, he was hit by a machine gun burst but undeterred he continued and managed to silence the gun. He later succumbed to his injuries and was martyred. 2nd Lt Manjunath was a gallant soldier and a gritty officer, who led from the front and laid down his life at the age of 26 years in the line of his duty. 2nd Lt Manjunath was given the gallantry award, “Vir Chakra” for his courageous action, leadership and self sacrifice.