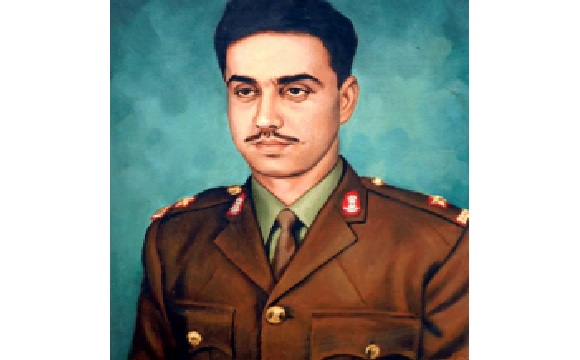 2nd Lt Karun Kanti Majumdar hailed from Rajasthan and was born on 31st August 1949 on the auspicious day of Janmashtami in the land of Veer Durgadas Rathore i.e. Jodhpur (Rajasthan). Son of Shri ML Majumdar and Late Smt Khukhu Rani Majumdar, he did his schooling from Air Force school Jodhpur as his father was serving in the IAF during that time. He later went to Government Dungar College at Bikaner in Rajasthan for his college education. He had inclination to join the armed forces since his younger days as grew up in various Air Force bases.

Eventually he got selected to join the prestigious Indian military Academy in December 1967 and passed out  in December 1969 from the Indian military Academy with flying colours. He got commissioned on 08 Dec 1969 into 10 Bihar battalion of the Bihar Regiment, a well known infantry Regiment. It was a newly raised battalion and had become part of the regiment in the year 1967. 2nd Lt Majumdar soon developed into a committed soldier and fine officer. He also had the distinction of receiving colours for the battalion from the Vice President President of India Shri GS Pathak.

During Indo- Pak 1971 war 2nd Lt Majumdar’s unit 10 Bihar was deployed in the Eastern Sector. The unit was deployed near Agartala under the operational control of 311 Mountain Brigade. This Mountain Brigade was functioning under 57 Mountain Division under overall operational control of 4 Corps. The Battle of Akhaura was one of the most significant battles of 1971 war and had a great military importance for the ultimate capture of Dacca. As part of the operational plan, 57 Mtn Div was tasked to capture Akhaura the border town of erstwhile east Pakistan. 2nd Lt Majumdar’s unit 10 Bihar crossed the international boundary on 01 Dec 1971 along with another battalion 4 Guards.

As Akhaura was a very important communication center, the enemy had carried out extensive fortification of the town and laid extensive mine fields. There was heavy concentration of artillery and enemy armour to defend the town. Though 10 Bihar started enclosing the enemy from 1 December onwards, the main attack was launched on the night of 4 December 1971. The objective given to 10 Bihar battalion troops was to capture the Akhaura rail junction. 2nd Lt Majumdar was functioning as an intelligence officer gathering vital information about the enemy deployment, required for the attack.

The attack launched by the battalion was met with aggressive counter attack by the enemy. During the fierce exchange of fire 2nd Lt Majumdar got seriously injured. He later succumbed to his injuries on 05 Dec 1971 and was martyred. 2nd Lt Majumdar was a gallant soldier and a gritty officer who led from the front and laid down his life at the age of 22 years in the line of his duty.