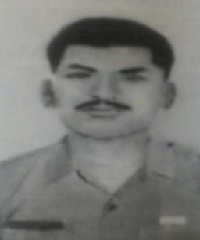 2nd Lt Jayendra Jai Singh Rane hailed from Gwalior district in Madhya Pradesh and was born on 27 April 1949. Son of Army veteran Major JS Rao Rane, he always wanted to follow into the footsteps of his father and serve in the Armed Forces. Eventually he joined the army in the year 1970 at the age of 21 years. He was commissioned into 5 Garhwal battalion of the Garhwal Rifles Regiment, an infantry regiment with a rich history of valour and battle honours.

During Indo- Pak 1971 war 2nd Lt Jayendra Jai Singh Rane’s unit 5 Garhwal was deployed in the Eastern Sector. The unit was deployed near Hilli a strategic border town of the erstwhile East Pakistan under the operational control of 202 Mountain Brigade. Though the Indo-Pak war officially commenced on 03 Dec 1971, when the Pakistani Air Force attacked 11 Indian Air Fields, the border skirmishes had started months before that when the refugees from across the border had started pouring in as a result of atrocities committed by the Pakistani forces. 202 Mountain Brigade functioning under operational control of 20 Mountain Division was tasked to capture Hilli in November 1971. The battle of Hilli turned out to be the most savagely fought battle in the Eastern sector. The battle of Hilli was fought over two phases; first from 22 Nov to 24 Nov and second phase from 10 Dec to 11 Dec 1971. 2nd Lt Jayendra Jai Singh Rane’s unit 5 Garhwal along with 8 Guards and 22 MLI were committed by 202 Mtn Bde for this battle with the support of Artillery and armour.

As part of ongoing operations as part of this battle, 5 Garhwal was tasked to capture an enemy post on 5th Dec. 2nd Lt Rane who was Commanding a company of 5 Garhwal was ordered to undertake this assignment. 2nd Lt Rane along with his soldiers launched the attack on the enemy post as planned on 05 Dec 1971. However the company got pinned down by heavy enemy fire. During the exchange of fire, 2nd Lt Rane got seriously wounded in one leg, but he manoeuvred one platoon to a flank so as to extricate the other two platoons. While doing so, he got shot in his other leg too. But with complete disregard for his own life, he continued to conduct the fight to extricate his men. However he later succumbed to his wounds and was martyred in the midst of battle. 2nd Lt Rane was a gallant soldier and determined officer who led his men from the front and laid down his life at the age of 22 years in the line of his duty.

2nd Lt Jayendra Jai Singh Rane was given the gallantry award “Vir Chakra”, for his exceptional courage, indomitable spirit and supreme sacrifice during the war.

On the 5th December, 1971, 2nd Lieutenant Jayendra Jai Singh Rane was Commanding a company of a Battalion of the Garhwal Rifles, which was ordered to capture an enemy post near Hilli in the Eastern Sector. The company was pinned down by heavy fire. Though seriously wounded in one leg, he manoeuvred one platoon to a flank so as to extricate the other two. In doing so, he was shot in his other leg also but with complete disregard for his own life, he continued to conduct the fight to extricate his men until he succumbed to his wounds in the midst of battle.