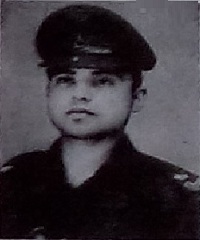 2nd Lt Hardev Pal Nayyar hailed from Dasuya in Hoshiarpur district of Punjab and was born on 15th Sep 1947. Son of Shri Gopal Dass Nayyar and Smt Soma Devi Nayyar, 2 Lt H P Nayyar did his schooling from D A V Higher Secondary School in Hoshiarpur and later graduated from the Desh Bandhu Gupta College, New Delhi. Subsequently he got selected to join the Army and went to the Officers' Training Academy(OTA) Chennai.

He passed out at the age of 23 years in 1970 and became a commissioned officer. He was commissioned into 8 Sikh LI of the Sikh Light Infantry Regiment, the infantry Regiment raised on 01 June 1966 at Saugar. After completing his training, very early in his service career, he got involved in the thick of operations as border tension arose with Pakistan in 1971.

Though the Indo-Pak war officially commenced on 03 Dec 1971, when the Pakistani Air Force attacked 11 Indian Air Fields, the border skirmishes had started months before that when the refugees from across the eastern border had started pouring in as a result of atrocities committed by the Pakistani forces. Prior to the outbreak of open hostilities 8 Sikh LI battalion had got deployed on the western border and had been engaged in a number of operations during aggressive patrolling that had been undertaken. 2nd Lt Hardev Pal Nayyar's unit, 8 Sikh LI as part of 96 Infantry Brigade was deployed at Vera (Ajnala) in Punjab during ‘Operation Cactus Lilly’. In addition to its defensive role, the battalion had number of counter-attack tasks. On the fateful night of 10-11 December 1971, 8 Sikh LI was tasked to execute one such task, which was to capture Pakistan’s Fatehpur Post.

Fatehpur post, fortified on all four sides with high bunds, was a virtual fortress with several automatic and anti-tank weapons
deployed for its defence. Its diamond-like shape made it equally difficult to tackle from all sides. On the night of 11 Dec 1971,
2nd Lt Hardev Pal and his comrades discounted all difficulties and rushed forward on to this coveted objective, in the face of deadly small arms fire and devastating artillery shelling. 2nd Lt Hardev Pal was functioning as a platoon commander in a company, which was assigned the task of attacking the enemy post.

During the assault, his platoon was held up by automatic fire from the enemy bunkers. 2nd Lt Hardev Pal realized that the bunkers needed to be neutralized at any cost to facilitate the advance of his platoon. With complete disregard for his personal safety, he crawled up to two bunkers and silenced them with grenades. While assaulting the third bunker, 2nd Lt Hardev Pal was hit by a burst of MMG fire. Though seriously wounded, he kept on encouraging his men till the post was captured. He eventually succumbed to his injuries and was martyred. By dawn, the battalion had achieved its objective and hoisted the tri-colour proudly at the captured Fatehpur Post. For its glorious victory, the battalion was bestowed with Battle Honour ‘Fatehpur’ and Theatre Honour ‘Punjab’. Since then, as a mark of remembrance of gallant heroes who fought this daring battle, 8 Sikh LI is known as ‘The Fatehpur Battalion’. 2nd Lt Hardev Pal Nayyar was a valiant soldier and gritty officer who led from the front and laid down his life at the age of 24 years in the line of his duty

On 11 December 1971, Second Lieutenant Hardev Pal Nayyar was platoon commander in a company, which was assigned the task of attacking an enemy post in the Western Sector. During the assault, his platoon was held up by automatic fire from the enemy bunkers. Second Lieutenant Hardev Pal Nayyar, with complete disregard for his personal safety, crawled up to two bunkers and silenced them with grenades. While charging the third bunker, he was hit by a burst of MMG fire. Though seriously wounded, he kept on encouraging his men till the post was captured, when he succumbed to his injuries. In this action, Second Lieutenant Nayyar displayed gallantry, determination and leadership of a high order.