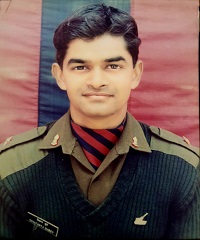 Lt Chaitanya Dubey hailed from Raipur in Chhattisgarh and was born on 03 Mar 1973 into a military family. Son of an army veteran Lieutenant Colonel Arun Dubey and Smt Neerja Dubey, Lt Chaitanya Dubey had a sister Priya as his sibling. He had an innate wisdom and made his mark as a gentle and precocious child. His twinkling, impish eyes spoke of a rare combination of intelligence and child-like innocence. His love for the armed forces and army in particular was clear when he did little things like taking interest in readying his father's uniform and also to not let anyone use it to wear just on a whim or fun's sake. While living in the Ambala Cantonment as a 10-year-old, he developed his love for flying as he watched planes and helicopters fly past his home. Tanks were a special love, too.

He continued to pursue his dream and made it to the top of merit list of NDA . He had full confidence that he was going to join the Air Force to become a fighter pilot and had entered all three of his options as Indian Air Force in the form. As luck would have it, even though he'd earned merit, he couldn't join the Air Force as he could not meet the medical standards required for vision. After college, he continued to follow his passion of manning guns like his father did in the two Indo-Pak wars of 1965 and 1971. Eventually his dream of donning Army uniform came true when he got selected to IMA, Dehradun. He was commissioned on 12 Dec 1998 into 24 Med Regt of the Regiment of Artillery, the combat arm of the Indian Army well known for its booming guns and other heavy caliber weaponry.

During 2000, Lt Chaitanya Dubey was serving with his unit deployed in Faridkot in Punjab, which was his first posting after commissioning. He soon honed his field-craft skills and developed into a fine officer. He acquitted himself very well and earned the respect of his seniors and peers as well. In May 2000, Lt Chaitanya's Regiment was tasked to take part in a warfare exercise along the Rajasthan-Pak border.

By early May 2000, Lt Chaitanya along with his unit troops had joined the warfare exercise which also included elements of various other combat units. The troops were not only being tested for their combat skills but also for their ability to withstand hostile weather conditions. To make the maters worse, a brutal sand storm began brewing at 5.00 pm on the fateful day of May 05, 2000. Despite poor visibility conditions Lt Chaitanya and his men continued with the combat maneuvers till late night. Lt Chaitanya was functioning as Forward Observation Officer with ‘B’ Sqn of the 84 Armoured Regiment during the ongoing exercise “Garam Hawaa”. However at about 10.00 pm, the tank carrying Lt Chaitanya toppled owing to low visibility and difficult terrain conditions. In the process, Lt Chaitanya's neck got struck by the hatch of the cupola of the tank. The severe and sudden injury proved fatal for him and a bright and exemplary young officer's life was extinguished. Lt Chaitanya Dubey was a committed soldier and a fine officer who laid down his life in the service of the nation.