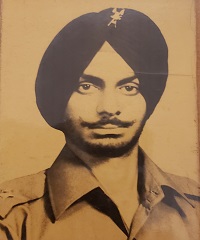 2nd Lt Balbir Singh hailed from Jalandhar in Punjab and was born on 14th November 1950. Son of Major Hazura Singh and Smt Kartar Kaur, 2nd Lt Balbir Singh had five other brothers as his siblings. He grew up in various military cantonments and studied from schools at different places, wherever his father was posted. Eventually, he completed his senior secondary education from CAV Intermediate College, Allahabad. Thereafter, he joined Ewing Christian College, Allahabad to do his graduation. In the third year of graduation, he got admission in the first year of Mechanical Engineering in University College of Engineering Burla, Orissa.

Besides being good in academics, he had keen interest in sports and specially excelled in cricket and played for Jalandhar District at Junior level and also at Allahabad University. As several generations of his family had served in the armed forces, the love for the Army life came naturally to him. During the course of engineering, he got selected to join the Army and went for the military training at OTS, Madras. He passed out of the OTS as a commissioned officer in Sep 1970 at the age of 20 years. He got commissioned into 7 CAV of the Armoured Corps, the combat arm of the Indian Army, well known for its potent tanks and other heavy weaponry. In March 1971, he got he was posted to a newly raised 71 Armoured Regiment. Barely one year into service, 2nd Lt Balbir Singh got involved into thick of operations as his unit got deployed on the western border, when the war with Pakistan became imminent.

During Dec 1971, 2nd Lt Balbir Singh's unit 71 Armd Regt was deployed in Punjab sector under the command of 86 Infantry Brigade Group. Jassar, as known in Pakistan, or Dera Baba Nanak (DBN), as known to India was a strategically important enclave east of the Ravi, belonging to Pakistan. This included the rail-road bridge over the river linking Passur-Narowal in Pakistan to the enclave. The Jassar or DBN Enclave gave an advantage to Pakistan for operations into the Indian territory towards the cities of Batala and Gurdaspur. Thus Indian Army made plans to capture the Dera Baba Nanak Enclave to deter any Pakistani designs. The task was given to 86 Infantry Brigade Group, for which 71 Armoured Regiment was placed under its command. The operation was code-named ‘Op Akal’.

On the night of December 5-6, in an audacious move, 71 Regiment less a squadron was launched from the north-eastern flank of the enclave with the aim of getting behind the enemy defences. This took the enemy completely by surprise. The task of the infantry units of 86 Infantry Brigade also became easier as the enemy defences were not prepared to take on a simultaneous armour attack from the rear.  The enemy armour with Chafee tanks was providing support to their infantry. 2nd Lt Balbir Singh and his comrades with their T-55 tanks engaged the enemy with great fire power that compelled them to make a hasty retreat. By first light on December 6, the enclave had been captured and the Tricolour was seen fluttering on the eastern side of the bridge.

However during this operation, 2nd Lt Balbir Singh got severely injured and later succumbed to his injuries. 2nd Lt Balbir Singh was a gallant soldier and a gritty officer who led from the front and laid down his life at the age of 21 years in the line of his duty.