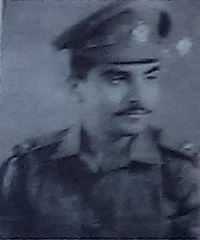 2nd Lt Ashok Kumar Nanchahal hailed from Dasuya in Ludhiana district of Punjab and was born on 05th Aug 1948. Son of Shri AP Nanchahal, 2nd Lt Nanchahal did his schooling from Laxmi Bai Nagar in New Delhi and graduated from Government college in Ludhiana. Subsequently he got selected to join the Army and went to the Officers' Training Academy(OTA) Chennai.

He passed out at the age of 22 years in 1970 and became a commissioned officer. He was commissioned into 14 Rajput of the Rajput Regiment, the infantry Regiment well known for its intrepid soldiers. After completing his training, very early in his service career, he got involved in the thick of operations as border tension arose with Pakistan in 1971.

During Indo- Pak 1971 war 2nd Lt Ashok Kumar Nanchahal's unit 14 Rajput was deployed on the western border. The unit was deployed in Punjab sector under 65 Infantry Brigade functioning under the operational control of 7 Infantry Division. 7 Inf Div under Maj Gen Freemantle was assigned the task of defending the sensitive areas of Harike and Hussainiwala headworks and Ferozepur town by denying the main routes of ingress from Pakistan into the area of his operational responsibility, namely Khalra-Patti Harike, Khemkaran-Patti-Harike, Khemkaran-Bhikhiwind -Amritsar, and Hussainiwala-Ferozepur. The main defences were to be based along the obstacle belt with covering troops deployed between the border and the belt. 2nd Lt Nanchahal's unit 14 Rajput under 65 Infantry Brigade was holding the defences along the Mari Megha drain from Bhuchar headworks on the Upper Bari Doab Canal to Bherowal. The front extended about 26 kms and was held on the main obstacle line by two battalions, while the third battalion provided screens and covering troops west of the drain with about two companies as brigade reserve for offensive and defensive tasks.

At approximately 1830 hours on 3 Dec 1971 the Pakistanis started shelling the Indian positions. Soon Pakistan forces occupied moved on the Upper Bari Doab Canal, especially opposite the Khalra area. The villages of Narli, Dode and Kalsian were contacted in no time. Thereafter the enemy forces occupied the village of Chhina Bidhi Chand. To secure the post across the canal and clear the Pakistanis from the area, it was decided to recapture Chhina Bidhi Chand. This move was expected also to relieve pressure on Khalra. 14 Rajput was assigned the task of capturing Chhina Bidhi Chand to defend Khalra.

With utter disregard to his personal safety, he charged towards the machine gun post single handed and lobbed a grenade through the loophole killing the enemy and silencing the guns. However while doing so, he was hit by enemy fire and got seriously injured. He eventually succumbed to his injuries and was martyred. 2nd Lt Nanchahal was a valiant soldier and gritty officer who led from the front and laid down his life at the age of 23 years in the line of his duty

Second Lieutenant Ashok Kumar Nanchahal was a platoon Commander in a Battalion Of the Rajput Regiment during an attack on the enemy positions at ‘Chhina Bidi Chand’ in the Khalra area in the Western Sector. During the assault, his platoon came under intense shelling and heavy automatic fire but Second Lieutenant Ashok Kumar Nanchahal enthused his men to press

home the attack. At this juncture, he noticed two enemy machine guns firing from bunkers and inflicting heavy casualties on our troops. With utter disregard to his personal safety, he charged towards the machine gun post single handed and lobbed a grenade through the loophole killing the enemy and silencing the guns. In this process, however, he was seriously injured and succumbed to his injuries. his act of valour inspired his men who charged and captured the objective inflicting heavy losses on the enemy.

In this action, Second Lieutenant Ashok Kumar Nanchahal displayed gallantry and leadership of a high order.