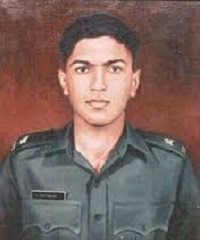 Second Lieutenant Arun Khetarpal was born on 14th October 1950 in Pune into a military family. Son of Lt Col (later Brigadier) M.L. Khetarpal and Mrs Maheshwari Khetarpal, 2nd Lt Arun was the eldest of their two sons. As several generations of his family had served in the armed forces, the love for the Army life came naturally to him. His great grand father had been in the Sikh army and fought against the British, while his grand father had served in the British Army during World War I. He studied from the Lawrence School , Sanawar located in Kasauli hills in Himachal Pradesh and did very well in academics as well as sports. He was made the school prefect in view of his all-round performance and he lived up to this school motto, “Never Give In” even after becoming an army officer.

He joined the National Defence Academy in June 1967. He belonged to Foxtrot Squadron and was the Squadron Cadet Captain of the 38th Course. Later on, he went to join the Indian Military Academy and was commissioned into the 17 Poona Horse on 13 June 1971. Just six months later, the war with Pakistan broke out on 03 Dec 1971 and 2nd Lt Arun Khetarpal was undergoing the Young Officers’ Course at Ahmednagar at that time. He was recalled from the course and soon joined his unit to take part in the famous “Battle of Basantar” in the Shakargarh sector.

During the Indo-Pak War of 1971, the 17 Poona Horse was assigned to the command of the 47th Infantry Brigade, which was involved in the Battle of Basantar in the Shakargarh sector. The Brigade had to establish a bridgehead across the River Basantar. On 15th December, the brigade had captured its objective, although, it was filled with extensive mines by the enemy, preventing deployment of tanks of Poona Horse. It was a joint operation by 17 Horse, 4 Horse(Two armoured Regiments), 16 Madras and 3 Grenadiers. The engineers had cleared the mines halfway when the Indian troops noticed alarming activity of the enemy armour asking for air support. At this critical juncture, the 17 Poona Horse decided to push through the minefield.

On 16 December, Pakistani armour launched the first of their counter-attacks under the cover of a smokescreen at Jarpal, targeting the ‘B’ Squadron. The commander of the squadron urgently called for reinforcements. 2nd Lt. Arun Khetarpal, who was in ‘A’ squadron and was stationed close by, responded promptly, along with the rest of his regiment. 2nd Lt Khetarpal rushed to meet the Pakistani armour and launched his ferocious counter attack. With his troops, he was able to subdue the enemy advance with his tanks successfully. However, during the battle, the commander of the second tank Lt Ahlawat got injured. Alone in charge, 2nd Lt Khetarpal continued his attack on the enemy. But the enemy did not retreat despite heavy casualties. 2nd Lt. Khetarpal attacked the incoming Pakistani troops and tanks taking down an enemy tank in the process. However, Pakistani forces regrouped and counterattacked. In the ensuing tank battle, 2nd Lt Arun Khetarpal with 2 remaining tanks fought off and destroyed 10 enemy tanks.

However during the fierce tank battle 2nd Lt Arun Khetarpal’s tank was hit by enemy fire, but he did not abandon the tank, instead he fought on. His final words over the radio to a superior officer who had ordered him to abandon his burning tank were, “No Sir, I will not abandon my tank. My Main gun is still working and I will get these bastards.” Then he set about destroying the remaining enemy tanks. The last enemy tank, which he shot, was barely 100 metres from his position. At this stage, his tank received a second hit and the shell entered into the tank through its cupola ripping his stomach. 2nd Lt Arun Khetarpal met a hero’s death, trying to deny the Pakistani Army the intended breakthrough. The enemy could not get the passage it was so desperately seeking and not one enemy tank could get past him. 2nd Lt Khetarpal’s body and his tank “Famagusta” were captured and were later returned to the Indian army. On 17th December, 1971, 2nd Lt Arun Khetarpal was cremated near Samba district and his ashes were sent to his family.

2nd Lt Arun Khetarpal was given the nation’s highest gallantry award, “Param Vir Chakra” for his cold courage, unfaltering leadership and supreme sacrifice. 2nd Lt Arun Khetarpal at the young age of 21 yrs performed an act of courage and self-sacrifice that went far beyond the call of duty.

On 16 December 1971, the squadron Commander of ‘B’ Squadron, the Poona Horse asked for reinforcements as the Pakistani armour that was superior in strength, counter attacked at Jarpal, in the Shakargarh Sector. On hearing this transmission, 2nd Lt Khetarpal who was in ‘A’ Squadron, voluntarily moved along with his troop, to assist the other squadron. Enroute, while crossing the Basantar River, Second Lieutenant Arun Khetarpal and his troops came under fire from enemy strong points and RCL gun nests that were still holding out. Time was at a premium and as a critical situation was developing in the ‘B’ Squadron sector, Second Lieutenant Arun Khetarpal, threw caution to the winds and started attacking the impending enemy strong points by literally charging them, Overrunning the defence works with his tanks and capturing the enemy infantry and weapon crews at pistol point. In the course of one such daring attack one tank commander of his troop was killed. Second Lieutenant Arun Khetarpal continued to attack relentlessly until all enemy opposition was overcome and he broke through towards the ‘B’ Squadron position, the Pakistanis fought very bravely and did not retreat even after losses, instead they kept moving forward after their initial probing attack on this squadron. He was so carried away by the wild enthusiasm of battle and the impetus of his own headlong dash that he started firing at the tanks that came so close to him and even managed to shoot and destroy one. Soon thereafter, the enemy reformed with a squadron of armour for a second attack and this time they selected the sector held by Second Lieutenant Arun Khetarpal and two other tanks as the point for their main effort. A fierce tank fight ensued: ten own tanks and 3 enemy tanks were hit and destroyed of which Second Lieutenant Arun Khetarpal personally destroyed 2, just then Second Lieutenant Arun Khetarpal was severely wounded. He was asked to abandon his tank but he realized that the enemy though badly decimated was continuing to advance in his sector of responsibility and if he abandoned his tank the enemy would break through, he gallantly fought on and destroyed another enemy tank. At this stage his tank received a second hit which resulted in the death of this gallant officer. Second Lieutenant Arun Khetarpal was dead but he had, by his intrepid valour saved the day; the enemy was denied the breakthrough he was so desperately seeking. Not one enemy tank got through.

Second Lieutenant Arun Khetarpal had shown the best qualities of leadership, tenacity of purpose and the will to close in with the enemy. This was an act of courage and self-sacrifice far beyond the call of duty.