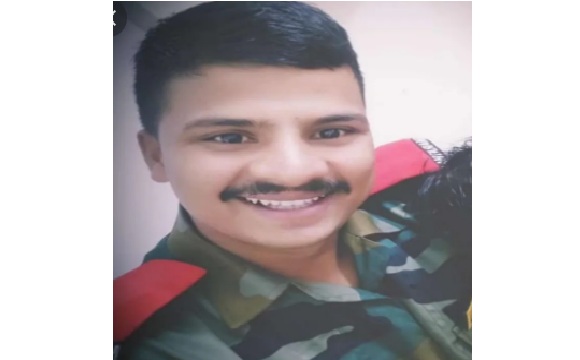 Naik Jadhav Prashant Shivaji hailed from Gadhinglaj taluk of Kolhapur district in Maharashtra. Son of an army veteran Shivaji Jadhav and Smt Renuka Jadhav, he had three sisters as his siblings. Naik Jadhav Prashant was always fascinated with Army life and wished to follow in the footsteps of his father since his younger days. He did his initial education till 10th from his native Basarge and thereafter completed his class XII at Gadhinglaj. He came from a family where his father and three uncles served in the Army and so did his many cousins.

He eventually got selected to join the Army in the year 2014 at the age of 20 years. He was recruited into the 22 MLI battalion of the Maratha Light Infantry Regiment, an infantry regiment well known for its gallant soldiers and a number of battle honours. After completing his training, he served in various operational areas and developed into a fine soldier with admirable soldierly skills. In the year 2019, he got married to Ms Padma and the couple was blessed with a daughter Niyati.

During May 2022, Naik Jadhav Prashant Shivaji's unit was deployed in the Turtuk sector in the Ladakh area of Kashmir. The AOR(Area of Responsibility) of the unit spanned over remote rugged mountainous terrain with extreme weather conditions, especially in the winter season. The unit troops were deployed on various forward posts and often undertook patrol to monitor the area in between the manned posts. The soldiers joining the unit on posting or returning from leave had to acclimatize in phases at transit centers before joining owing to extreme weather conditions. on 27 May 2022, Nk Jadhav and 25 other soldiers were required to go from the transit camp in Partapur near Siachen to a forward location in Sub Sector Hanif.

As the vehicle carrying Nk Jadhav and 25 other soldiers was on its way, it skidded off the road and fell into Shyok River. The vehicle plummeted to a depth of 50-60 feet. injuring all the soldiers. The Army launched the rescue operation and the injured soldiers were transferred to a field hospital at Partapur, where Army surgical teams were dispatched from Leh. However Naik Jadhav Prashant Shivaji and six other soldiers succumbed to their injuries and were martyred. The other 19 soldiers were air-lifted and moved through Green Corridor in Chandigarh for treatment at Command Hospital. Besides Nk Jadhav Prashant Shivaji, the other martyred soldiers included Sub Vijayrao Shinde from the Satara district of Maharashtra. Nb Sub Gurudayal Sahu from Betul in Madhya Pradesh, Naik Sandeep Kumar from Hazaribagh in Jharkhand, Naik Ramanuj Kumar from Patna in Bihar, Lance Naik Bappaditya Khutia from Pashchim Mednipur in West Bengal and L/Hav Mohd Shaijal T from  Malappuram in Kerala. Naik Jadhav Prashant Shivaji was a gallant soldier, who made the supreme sacrifice at the age of 28 years in the line of his duty.