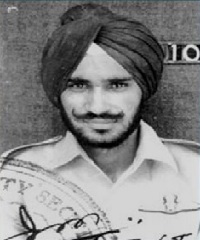 Flying Officer Nirmal Jit Singh Sekhon was born on 17 July 1945 in the village of Issewal in Ludhiana of Punjab.  Son of Sri Trilok Singh Sekhon and Smt Harbans Kaur, Fg Offr Nirmal Jit was fascinated with aircraft and Air Force life since his childhood as his village was located in the vicinity of Air Force base Halwara near Ludhiana. He was also inspired by the experiences of his father who served in the IAF and later retired as (Honorary) Flight Lieutenant.

Fg Offr Nirmal Jit studied in Khalsa HIgh school Ajitsar Mohie near Ludhiana and later joined Dayalbagh Engineering college in Agra in 1962. However he left the engineering course midway and joined the IAF. He was commissioned into the IAF on 04 June 1967 as a fighter pilot. After completing his rigorous training , Fg Offr Nirmal Jit joined No 18 Squadron, known as “Flying Bullets” in Oct 1968.

During the Indo-Pakistani War of 1971, Flying officer Nirmaljit Singh Sekhon was a pilot of a Gnat detachment (18 Squadron, known as “The Flying bullets”) based at Srinagar. In accordance with the international agreement dating back to 1948, no air defence aircraft were based at Srinagar, until hostilities broke out with Pakistan. Fg Offr Sekhon was, therefore, unfamiliar with the terrain and was not accustomed to the bitter cold and biting winds of the Kashmir winter. Nevertheless, he and his colleagues fought successive waves of intruding Pakistani aircraft with valour and determination. On 14 December 1971, Srinagar airfield was attacked by six Pakistan Air Force F-86 jets of 26 Sqn from PAF base Peshawar.

Fg Offr Sekhon was on readiness duty at that time. As soon as the first aircraft attacked, he rolled for take-off as No. 2 in a two-Gnat formation, with Flt Lt Ghumman in lead, just as the first bombs were falling on the runway. He could not start immediately as the dust from the first Gnat was clearing. By the time the runway was fit for take-off, the six enemy aircraft were overheard, and attack on the airfield was in progress. Nevertheless, in spite of the immense danger of attempting to take off during an attack, Fg Offr Sekhon took off and immediately engaged a pair of attacking Sabres. In the ensuing air battle, he made a direct hit on one Sabre and set another ablaze. The latter was seen heading away towards Rajauri, trailing smoke.

He thus succeeded in damaging and knocking off two of the enemy aircraft. In the fight that followed, at treetop height, Fg Offr Sekhon held his own but was eventually overcome by sheer weight of numbers. Fg Offr Sekhon, after being hit, was advised to return to the base. It is believed that he had flown in straight, wings level for some time, then going inverted, plummeting down, probably due to the failure of the control system. He attempted a last-minute ejection, which did not prove successful, as his canopy was seen to fly off.

His aircraft crashed and he was martyred but his sacrifice did not go in vain. The Sabre jets, unable to complete their attack on the town and its airfield, immediately retreated and fled the scene. The true heroism, exemplary courage, flying skill, and determination, above and beyond the call of duty displayed by Flying Officer Sekhon, was in the finest tradition of the IAF. His bravery and skill, against odds of 1 to 6, earned him India’s highest wartime medal for gallantry, the “Param Vir Chakra”.

Fg Offr Sekhon was the first officer of the IAF to have received the nation’s highest gallantry award , “Param Vir Chakra” and continues to be remembered as one of the greatest air warriors of the IAF.

Flying Officer Nirmal Jit Singh Sekhon was a pilot of a Gnat detachment based at Srinagar for the air defence of the valley against Pakistani air attacks. From the very outbreak of the hostilities he and his colleagues fought successive waves of intruding Pakistani aircraft with valour and determination, maintaining the high reputation of the Gnat aircraft. On 14 December 1971, Srinagar airfield was attacked by a wave of enemy Sabre aircraft. Flying Officer Sekhon was on readiness duty at the time. Immediately, however, no fewer than six enemy aircraft were overhead, and they began bombing and strafing the airfield. In spite of the mortal danger of attempting to take off during the attack, Flying Officer Sekhon took off and immediately engaged a pair of the attacking Sabres. In the fight that ensued, he secured hits on one aircraft and damaged another. By this time the other Sabre aircraft came to the aid of their hard-pressed companions and Flying Officer Sekhon’s Gnat was again outnumbered, this time by four to one. Even though alone, Flying Officer Sekhon engaged the enemy in an unequal combat. In the fight that followed, at treetop height, he almost held his own, but was eventually overcome by the sheer weight of numbers. His aircraft was shot down by a gunfire of one of the Sabres and he was killed. The sublime heroism, supreme gallantry, flying skill and determination above and beyond the call of duty displayed by Flying Officer Sekhon in the face of certain death have set new heights in Air Force traditions.

Ravinder Singh Gill, a family friend recounts his association with the martyr.

“My dad and Trilok uncle were very fast friends. You can say more than relatives. In my school at Kanpur everyone knew that Nirmal Vir Ji was my cousin as I called his parents Mama Ji and Mami Ji as my mother belonged to a Sekhon Family. I’m having rate photographs of his parents and widow Manjit bhabhi ji holding PVC in her hands. I took those on 30 Jan 1972 at Kanpur. Nirmal Vir Ji’s Idols were KEELOR BROTHERS and Abdul Hameed. Gnat was his favourite Aircraft and to continue in Gnat Squadron Vir Ji sacriced his big JOODA (higher than his turban) which is visible in all his photographs. I was given a huge respect by students as well as teachers because they thought him my cousin. When first time news broke out on 14 Dec 1971 in Evening, Trilok Mama Ji was at our IAF Family Quarter as in Mami Ji’s absence he occasionally dined with us.”